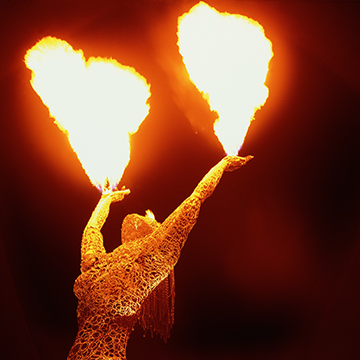 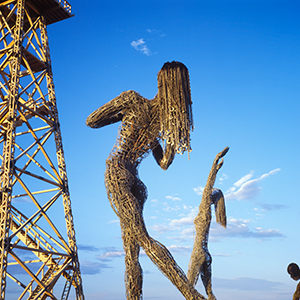 Ed Hoffman’s Burning Man photos at Art House Design are burning hot images of the freewheeling annual celebration of art in the burning sands of Nevada's Black Rock Desert. Viewing these photos made me wish I could drag my old bones into the desert and spend a week with the artists and dancers and other celebrants who make this event one of the more popular art happenings in the United States.

Once a year, tens of thousands of participants gather to create Black Rock City, a kind of Woodstock of art dedicated to community, art, self-expression, and self-reliance. They depart one week later, having left no trace whatsoever. These artists are environmental stewards.

Photographer Ed Hoffman spent a year and a half documenting the events in 2007 and 2008. “I endeavored to document the epitome of Burning Man: free spirit and creativity,” Hoffman writes. “I feel that these images … represent a profound sense of spirituality, both visually and emotionally.”

Burning Man originated in San Francisco 20 years ago, and then moved to the desert 100 miles north of Reno. Last year nearly 50,000 people attended. They come, they dance, they create fabulous art installations and party for a week.

In addition to documenting the anarchistic and celebratory spirit of Burning Man, Hoffman’s photographs are beautifully designed images. He captures the light and openness of the desert, the burning sun, clouds of windswept dust, the rhythm or objects and people in open space, and the brilliant colors.

There are lots and lots of nudes in these photos, which like the event itself is a celebration of the beauty of the human body as well as a celebration of art. There are painted bodies and costumed bodies, bodies at rest and in motion. And there are many shots of strange and wondrous vehicles, whirligigs, and mobile art.

There are about 60 photographs in the show, spread throughout the two rooms of the gallery. (People who are unfamiliar with Art House Design may not realize they can walk past the framing shop into a back room that doubles as a performance space and a second gallery.)

Here are some of the more interesting images seen in the front gallery:
Pig Mobile on Playa is a big, fat, pink car in the shape and image of a pig. Very cute.
Beetle Mobile on Playa is a beetle car with headlight eyes on long extended antenna-like forms. In color it almost matches the surrounding desert.
Dancer on Playa pictures three naked dancers circling big bright blue umbrellas, one man and two women. Their nakedness is natural, unpretentious and innocent. I can’t imagine images of nudity being any less salacious.
Various images of fantastic light and fireworks displays
Whirligigs on Playa pictures five whirligig sculptures standing in formation on the sand, each appearing to be about 10 feet tall, with random bicyclers pedaling around and around in the background
Dancing on Stilts pictures a woman on tall stilts wearing a blue top and long, flowing white pants in front of blue pyramids.
Wild Woman is a close-up of a woman’s face and upper torso. She is wearing a knit top and has wild hair, and is posed against a multi-colored cloth.

Typical of many of Hoffman’s photos, the woman pictured in "Wild Woman" almost blends into the patterned background and the dancer on stilts looks as if she were costumed specifically to be posed in front of the blue pyramids. This is probably the most telling hallmark of his photos — they combine the freedom and spontaneity of random snapshots with color and design elements that appear to be carefully staged.

Everything is very open with a clear explanation of the issues.
It was definitely informative. Your website is extremely
helpful. Many thanks for sharing!
Also visit my web-site : cheap car accessories