Lakewood Playhouse's 'Into the Woods' silly yet sophisticated 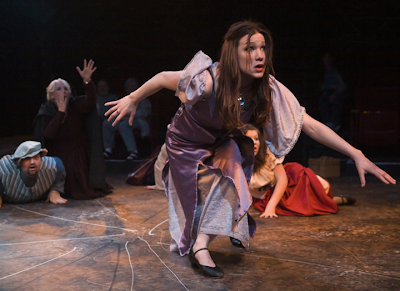 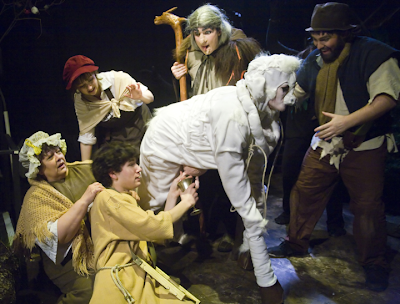 From in The News Tribune
Pictured: Alison Monda as the witch and Kat Christensen as Milky White with the cast of "Into the Woods." Photo by Dean Lapin.

On the one hand, the Lakewood Playhouse performance of the Stephen Sondheim and James Lapine musical “Into the Woods” is a well-acted and especially well-directed parody of all the major children’s fairy tales skillfully woven together into one silly yet sophisticated story. On the other hand, it is a dark and twisted tale of temptation, greed and human frailty that calls to mind another Sondheim dark fantasy, “Sweeny Todd: The Demon Barber of Fleet Street.”

And on the third hand, it is a long play (slightly more than three hours counting intermission) that gets a bit too loud and angry in the early part of the second act and has a lot of screeching and shouting and irritating sound effects -- all of which fit well with the mood of the story but are nevertheless nerve jangling.

Played in the round, as all Lakewood Playhouse performances are, the action comes at you from all four corners, with characters popping up here and there in rapid succession like the actors in the old comedy show “Laugh In.” This stereophonic jumble is especially noticeable in songs in which short verses are sung by multiple characters and in the title song and its variations in which the entire 20-person cast is singing and dancing in complexly choreographed movement (amazing choreography by Stephanie Kriege). Even a pair of acting stagehands in tree costumes get in on the act (Carina Coppedge-Pope and Ellyssa Payant). These dizzying dance sequences are admirably staged by director Julie Halpin.

The interwoven story lines revolve around a baker (Jerod Nace) and his wife (Katie Skovholt) who are cursed by a witch (Alison Monda) and, in order to break the curse, must go into the woods and find a milky white cow, a blood red cape, hair the color of corn, and a slipper as pure as gold. They find all four items with little difficulty, but securing them from their owners is another matter. Their desperation to get these items brings out both the best and the worst in these all-too-human characters and those they encounter on the way.

The milky white cow who can’t give milk (played with great charm by Kat Christensen) belongs to Jack of “Jack and the Beanstalk” fame (Bryan Gula). The cape belongs to Little Red Riding Hood (Claire Idstrom). The yellow hair is that of Rapunzel (Christine McNeal), and the golden slipper is the one Cinderella (Chelsea A. Lechelt) lost at the ball. Other famous fairy tale characters who play a role are Bruce Story as Cinderella’s prince and Matt Flores in the dual role of the wolf and another prince, one who pines for Rapunzel. And there is a comical narrator (Marty Mackenzie) who every once in a while steps into the story in the guise of the Mystery Man. It is a multi-layered and complex story, but not at all hard to follow.

The most amazing performances are turned in by Skovholt and Monda. Skovholt is one of the few actors who plays her part in a fairly straight-forward and naturalistic manner. She is believable as a good country wife who gives in to very human temptations. Her facial expressions are charming and tell a lot about her character, and she has a beautiful voice. Monda displays terrific range in voice and acting ability as the screeching witch. I thought for sure she was going to rip her vocal chords in the first act, but in the second act she was still able to sing with a strong yet mellow voice.

Nace also plays his part fairly straight-forward and without any outlandish flourishes. He’s the glue that holds everyone else together.

Flores, first as the wolf, is terrifically funny, and then he is equally hilarious in an entirely different persona as the prince who falls in love with Rapunzel. His duet with Cinderella’s prince on the song “Agony,” is one of the finest and funniest songs in the play and one any frustrated lover can identify with.

Finally, there are two young actors in this production who warrant special notice: Christensen and Bryan Gula as Jack. They are young actors just beginning what will surely be long and successful careers. Gula shows great promise as both an actor and a singer, and Christensen may very well be the most charming cow ever to be led around a stage on a leash.

Despite all the fairy tale characters, this play will probably be much more appealing to adults than to children; there is nothing in it that is inappropriate for children – but it is as dark and as harsh as it is funny and entertaining.