‘Elephant Man’ focuses on the abstract 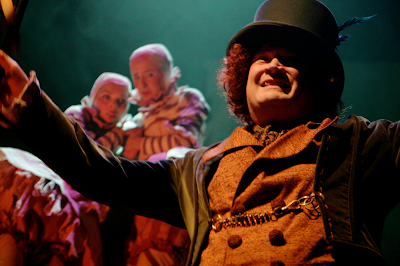 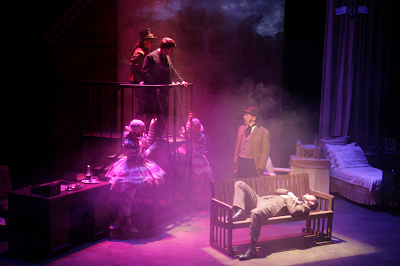 In “The Elephant Man” Harlequin Productions makes full use of certain theatrical traditions that have become Harlequin trademarks.

There are obvious connections between theater and film, with many plays being made into films and vice-versa – “The Elephant Man” being but one of many examples. More so than movies, live theater asks audience members to suspend disbelief and fully accept as real what their eyes clearly tell them is not real. In this respect, theater is more akin to a circus or sideshow than to film, and Harlequin, beginning with its very name, has often emphasized the sideshow aspect of theater.

This version of “The Elephant Man” is highly stylized and abstract. Harlequin-like women called Pinheads (Amy Hill and Hanna Buschor) dance and sing with mime- and robot-like movements and serve as commentators throughout, while “Jelly” (Jessica Blinn) moves along with the Pinheads and plays a soulful violin a la the “Fiddler on the Roof.” John Merrick (Jason Haws) is displayed as a sideshow attraction on a rolling platform, scenes are set with projected images reminiscent of old-fashioned newsreels and introduced with written titles in the style of silent movie narration, and actors repeatedly step out front to address the audience directly – one of the more interesting instances of which being when every person who knows Merrick tells the audience how he reminds them of certain aspects of their own personalities.

There is absolutely no attempt at realism in this production, and yet the story that is presented is historically accurate; the words and the emotions ring true.

Joseph Merrick, who was mistakenly called John in almost everything ever written about him, suffered from a condition called Proteus syndrome, which left him crippled and hideously deformed. He survived financially by working as a sideshow freak until Frederick Treves (Scott Lindzion) brought him to the London Hospital where he lived out his life and was befriended by such luminaries as Princess Alexandra (Blinn) and the famous actress Margaret Kendal (Deya Ozburn).

Playwright Bernard Pomerance intended that the play be presented in an abstract manner because he thought attempts to use heavy makeup to mimic Merrick’s condition would detract from the real heart of the story, which is the emotional effect of Merrick’s deformities on himself and others. Haws uses no obvious makeup; his portrayal of the man depends entirely on posture and voice. He twists his body and limps crab-like on his cane.

Lindzion is probably the most naturalistic actor in the play, which contrasts with the highly stylized acting of Haws and that of Dennis Rolly as hospital administrator F.C. Carr Gomm and Russ Holm in the part of various strange characters including the Pinhead manager, a British Lord, a porter and a London policeman. Also notable is David Dear who plays a bishop and a railway conductor and one of the more complex characters in the play, the carnival promoter who employed Merrick and treated him well at first but eventually abused and then abandoned and stole from him.

Also of particular note are the subtle and various uses of British accents, which may be attributed with kudos to dialect coach Andy Gordon.

This is an intense play that is Shakespearean in scope and style with an artistic blend of realism, abstraction and philosophical musings. It may not be for everyone. It is certainly not for those who prefer their entertainment to be light and fluffy, but it should appeal to anyone who likes challenging artistic endeavors.