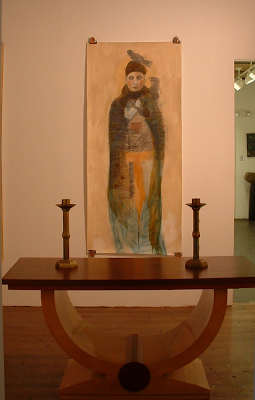 Published in the Weekly Volcano, April 2, 2009
Pictured: installation view inside Robert Daniel Gallery with Helene Wilder drawing on the wall

Tacoma is just now beginning to awaken to what a treasure it has in The Robert Daniel Gallery. It’s like a mini-Museum of Modern Art tucked away in a nondescript warehouse on Fawcett Avenue.

On display now is a group show called "Signs of Spring" featuring works by more than 15 well known regional artists. I previewed the show before it was quite ready for opening while, in fact, Tad Crawford was hard at work on his mural-size installation in the middle gallery (Robert Daniel has many, many rooms). Back in October I described Crawford’s work as prism-like circular forms that look something like lenses floating over deeply layered backgrounds painted in acrylic with paper and resin, with “an amazing illusion of shallow space as if you’re seeing through layers of glass.” In this show Crawford is installing some fifty little paintings similar to what was just described to be hung in a line across a wall upon which he has painted a similar yet contrasting design with charcoal gray ellipses in a sweeping design cut by a single, bright red zip of an arch. When I visited the gallery Crawford was up on a ladder painting over this with white gesso using a commercial house painter’s roller. He said that when he hung all the little paintings over the wall painting the contrast was too strong in the wall painting and he had to knock it down a notch so it wouldn’t clash too much with the other paintings. At that point in time the gray ellipses could be seen through veils of white paint. It looked potentially fabulous, and although I haven’t seen the finished work I’m sure it must be great.

Also showing are three works by Helene Wilder, a figure painter whose work I saw years ago at the old Commencement Art Gallery and at Patricia Cameron’s gallery in Seattle. They are imposing figures drawn with great skill.

Another interesting figurative painter in this show is Mark Larson. I saw two of his paintings and was told there may be more added. Both paintings were surrealistic images of women. In one, a blindfolded woman stands behind a peacock with tail feathers spread. In the other, a blonde glances over her shoulder while wearing a red cape that morphs into a flower pot. The flowers in the pot are paint brushes. Behind her is a city that looks like Venice. I was impressed with the inventiveness of his images, especially the red cape, but my reaction to his painting style was lukewarm at best.

Larson, a self-described visionary realist who has shown nationally and internationally in solo shows and exhibitions such as the Florence Biennale and an upcoming International Landscape/Dreamscape exhibition in Switzerland, will be included in Best of America – Oil Painting Volume II, a book to be released this summer by Kennedy Publishing. Having garnered numerous awards, including several international best-of-show awards, his paintings are now widely collected on several continents and are in private and public collections such as Princess Cruise Lines, Leigh Yawkey Woodson Art Museum, and many others.

Olympia artist Tom Anderson is also featured, with half a dozen paintings. Anderson’s work is abstract with an industrial look and densely textured surfaces. He attaches strips or bars of metal to the surface of his paintings and scratches and etches into them, paints over them, draws with graphite and other materials to create the look of old tin and wood that has been left out in the weather for ages (yet is all slick and shiny). His designs are generally simple architectonic forms with rectangles, open spaces and hastily scrawled swooping lines. Brilliant white, gold and silver colors predominate in many of his paintings, but at least one in this show — "Watermark" — is an almost solid, flaming red with small bars of a dull tan color at the bottom and highly energized pencil markings flowing freely across the top. This is a very vibrant painting.

I was also particularly impressed by three small paintings by Marcio Diaz. These images of farmers and beasts of burden shimmer with densely layered circles in many colors, which give them the look of a Pointillist painting by Georges Seurat.