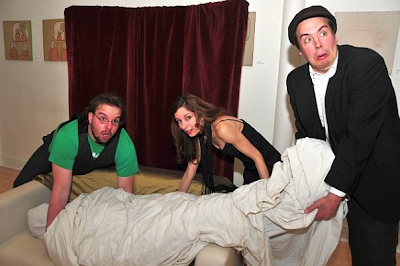 
“Loot” by Joe Orton was ahead of its time when it premiered in Cambridge, England, in 1965. Called a black comedy, it was shocking in its irreverence and its skewering of such institutions as the Catholic Church. Nothing was sacred. “Loot” poked fun at the upper class, portrayed law enforcement as corrupt, and made light of the dead. Plus, major characters in this play were extremely casual about sex.
But what was seen as outlandish and even revolting in 1965 is simply farcical today. By today’s standards “Loot” is not so much a dark comedy as a comedy of the absurd, and Orton is now accepted as a comic genius in a line that runs from Oscar Wilde to Monty Python to “South Park.”

Mrs. McLeavy (Tiffany Poplack) is dead. It’s the day of the funeral and the nurse who cared for her, Fay (Michelle Garayua), is already plotting to marry the grieving widow, (Mark Matthies). Prim, proper and dedicated on the outside, Fay is a scheming gold digger who has murdered seven or eight previous husbands. The McLeavy’s son Hal (Malcolm Sturdevant) and his bisexual partner Dennis (James Holmes-Pohls) have just robbed a bank and need a place to hide the loot. Mrs. McLeavy’s casket seems the perfect hiding place, but there’s not enough room in the casket for the money and the body, so the body must be stashed elsewhere.

Along comes a police inspector, Truscott (Chris Cantrell), who suspects the loot from the bank robbery is hidden in the McLeavy’s home. If any reason for his suspicion was ever given, I must have missed it, but I suspect he had no reason. Throughout the play Truscott proves that his senses of logic and deduction are absolutely absurd.

Typical farcical madness ensues as Dennis and Hal keep trying to hide the body and Truscott interrogates everyone with tactics that make the most unprincipled of rules-breaking television cops look like saints. All the while Dennis and Hal flirt with one another. Hal seems devoted to Dennis. He calls him baby and is obviously in love with him, but Dennis is no one-man man, as it is revealed that he has fathered at least five babies with five different women. And Fay tries to seduce practically everyone.

It’s a wild and fast-paced play replete with adult language and violence.
During the first 10 to 15 minutes of the play I thought Garayua was over acting terribly, but as the absurd nature of the play, and in particular her conniving and phony character came to light I began to appreciate her acting more, although I think she may not have been the best actress for the role. She seemed like she was trying too hard – it was difficult to see her as the character rather than the actress.

Matthies as Mr. McLeavy, Pohls as Dennis and Matthew Green in a small part as a policeman all play their parts fairly well. But the actors that really stir up the comic stew are Cantrell and Sturdevant. Cantrell’s posturing and his little bits with a pipe make him look like an insane version of Hercule Poirot, and when he gets mad he is simultaneously shocking and frightening. But right after he goes over the line into gratuitous violence he reminds us that we’re watching a comedy. As for Sturdevant, he is simply wonderful. I love the way he rolls his eyes heavenward.
Finally, a word must be said about Tiffany Poplack. Since she’s dead throughout, they could have used a dummy, or just a bundle of rags, but Poplack manages to make something special out of this role.

I wish you would have seen the show on another night. Michelle was trying too hard to get laughs and was hamming to the audience. I corrected this and she has been flawless since. I am sorry you came on her off night.

Me too, but that's one of the peculiarities of theater. Not every performance can be the best, and reviewers can write about only the ones they see. I'm glad to hear you made adjustments.