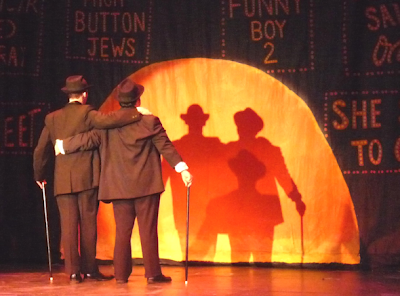 “The Producers” at Tacoma Musical Playhouse is fabulous.


The incomparable Mel Brooks took Broadway by storm in 2001 when he adapted his own 1968 movie of the same name for the stage and garnered an incredible, record-breaking 12 Tony Awards (and followed up by making a new movie of the play of the movie -- does that sound like a bit out of a Mel Brooks film, say for instance the climax of “Blazing Saddles”?).

“The Producers” is a self-proclaimed equal opportunity offender that lampoons Broadway musicals and makes fun of everyone -- especially Jews, Nazis and homosexuals. It’s the ideal example of how to be offensive without truly offending anyone. Brooks does it by skewering stereotypes, overdoing everything, and doing it all with an affectionate spirit. The director and cast at Tacoma Musical Playhouse obviously understand the spirit of Brooks’ humor.

The storyline is absurdly simple and simply absurd. Max Bialystock (Frank Kohel) and Leo Bloom (Scott Polovitch-Davis) attempt to bilk the investors of their Broadway musical by producing a gigantic flop and pocketing the millions of dollars Bialystock has wheedled out of little old ladies by seducing them. They attempt to produce the worst and most offensive play imaginable, and it turns out to be a huge hit.

From the opening strains of the overture by Jeff Stvrtecky’s orchestra, which begins with the hauntingly lyrical “Springtime for Hitler,” it is clear that this hummable and danceable music would be great even if the lyrics were not so funny. Other great songs include the almost touching “I Wanna Be A Producer,” sung beautifully by Polovitch-Davis in an accounting firm; the hilarious “Der Guten Tag Hop-Clop” sung by growly-voiced Chris Serface as the insane Nazi playwright Franz Liebkind; and the indescribably campy “Keep It Gay” by Gregory Conn as the prancing drag queen Roger DeBris with a chorus line led by John Huddlestun as Carmen Ghia. (Note: I didn't mention this is the print version but I think people should take particular note of Huddlesun. He's one of those actors who keep showing up in ensemble casts, usually in unnamed roles, but who always manages to stand out. I think he's going to be a star.)

The casting is outstanding, and by this I mean that not only are all of the primary characters played by accomplished singers and actors, but they are well matched to their characters in terms of physical appearance. Serface, for instance, is a big man with a commanding voice who looks comically frightening as the nasty Nazi, and Polovitch-Davis has moves that remind me somewhat of Pee Wee Herman and somewhat of a young Jerry Lewis, making him the ideal choice for the nerdy and nervous Bloom. He and Kohel are well matched (or more accurately beautifully mismatched) as the unlikely partners. Kohel plays Bialystock differently than his predecessors, Zero Mostel and Nathan Lane; his Max is toned down a bit yet still very funny, and he has a terrific voice.

Conn -- whom audiences will fondly remember in a much straighter role (pun intended) as the preacher in “Footloose” -- seems to have been born to the role of Roger DeBris. He’s funny enough in the gay spoof “Keep It Gay,” but when he steps in as a substitute actor to portray Hitler in the “Heil Me” portion of “Springtime for Hitler” he absolutely wows the audience. He’s not only the hammiest of hams, he has an amazing voice.

The other outstanding principal character is the ditzy and sexy Ulla (Jenny McMurry). She puts on a Swedish accent so broad that it is almost impossible to understand a word she says, and she’s a terrific dancer.

The sets are kept fairly simple and consist mostly of scenic backdrops painted by Dori Conklin. The most inventive bit of scenery is the accounting office with the stacks of file cabinets that open up to reveal chorus line dancers. And the pigeons are quite an enjoyable surprise. Most scene changes are handled unobtrusively by having actors sing and dance in front of a curtain while props are moved, thus doing away with the often frustrating distraction of stagehands moving things about between scenes.

Publicity materials for “The Producers” list it as not appropriate for children younger than 12. It is a bawdy show, but not prurient or otherwise objectionable.