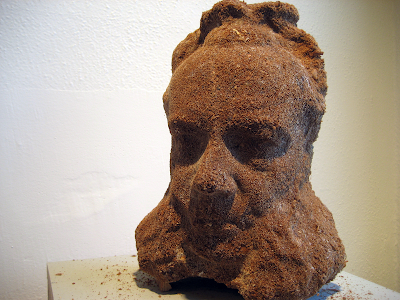 Eakins and Dombrosky are installation/conceptual artists. Their work tends to be more experiential and thought provoking than visual, yet some of the works in Phantasm Chasm at Fulcrum are visually intriguing, and some are downright beautiful to look at.

Each piece has its story, and the more you know about the stories the more thoroughly you can appreciate the work. I’ve often said that a work of art should not have to depend on wall text or explanation but should stand on its own as a visual entity and any irony or message or story should be self-evident. In this show the works do stand on their own visually, if not narratively, but explanations are needed for full understanding. So be sure to read the wall texts and ask gallery workers for more information.

The following statement of purpose also helps: “Phantasm Chasm uneasily unites some of the failed opportunities, tragic events, and myths in Tacoma’s past.”

Tacoma’s seedier history is documented in strange and inventive ways. But also some of the nicer things about T-town.

The centerpiece of the front gallery is a bullet-shot portrait of John Allen Muhammed, the Beltway Sniper who with his teenage partner, Lee Boyed Malvo, murdered 10 people near our nation’s capital. The gun Malvo used was stolen from Bulls Eye in Tacoma, and Eakins shot this portrait full of holes at the Bulls Eye target range with the same model gun. It is a stark image made more powerful by knowing the story and imagining what emotions Eakins might have felt while shooting that gun.

Less dramatic but equally inventive is a portrait of Norwegian playwright Henrik Ibsen modeled after his sculpted portrait in Wright Park. The interesting twist is that this sculpted bust is made from a Presto-Log, and I was told that there was a connection between Ibsen and the invention of the Presto-Log; although in my brief online research I was unable to find any connection. Still, it’s a very interesting sculpture. I particularly like that the fiber shavings are left where they fell around the base, creating the impression that the bust was just finished.

A group of 14 embroidered fish in glass goblets called "Beautiful Males" is delicate and quite beautiful. Each of the 14 goblets is hand blown by a different local glass artists. Artists represented include Oliver Dorris, owner of Fulcrum Gallery, plus Eakins, Dombroski and others.

Also done in collaboration with another artist is a group of works collectively called "Weeds of Concern," oddly shaped terrariums made by glass artist Ellen Ito and filled with noxious weeks. The terraiums are shaped like goards or some kind of horn and the earth and grasses inside are attractive, but apparently deadly.

Another piece I really enjoyed was an embossed print of a manhole cover made by placing heavy paper over an actual manhole and driving over it with a steamroller. It was done as part of the Wayzgoose event at Kings Books, so in addition to being a nice work of art, it documents a Tacoma event.

Also on display are a group of popular Tacoma patches, which you can buy for a mere $15 each. Some of them are already sold out, but they’ll take backorders and make more.