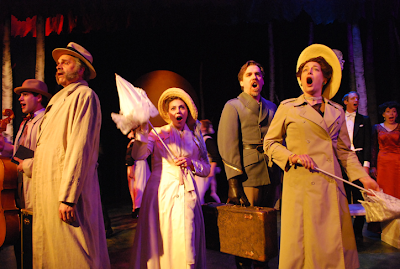 "A Little Night Music" at Capital Playhouse
reviewed for The Olympian, The News Tribune


“A Little Night Music” is one of those plays you either love or hate – or gradually learn to love. Ardent Sondheim fans tell me it’s their favorite of his plays. A post-opening-night press release bragged about a “weekend of full houses and rip-roaring applause!” But there were quite a few empty seats the night I saw it, and the audience was slow to warm to it. It starts off slowly and a little too ponderously, and the music is difficult to appreciate. It’s not easy listening and it’s not rock ’n’ roll. It’s more classical, lush and romantic, and nearly all set in waltz time, which is fitting to its late-19th-century Swedish setting.

It’s the story of Fredrik Egerman (Jeff Kingsbury), a successful, middle-aged lawyer married to 18-year-old Anne (Erica Penn). Still a virgin 11 months into their marriage, Anne vows that she will give in to her husband “soon.” Significantly, time is ambiguous throughout the play. It is not quite night but almost, though the constant backdrop features a gigantic harvest moon behind moveable scrims of birch trees seen by moonlight. And featured songs constantly refer to time: “Now,” “Later,” and the aforementioned “Soon.”

Frustrated with his sexless marriage, Fredrik has a brief affair with a lover from days gone by, the beautiful actress, Desiree Armfeldt (Jennie May Donnell). The well-crafted plot becomes a smorgasbord of secret trysts and jealousies involving Desiree’s other lover, the haughty and dangerous Count Carl-Magnus Malcolm (Bruce Haasl); the count’s wife, Charlotte (Sara Flotree); Fredrik’s son, Henrik (Jamie Cooper), who is morally conflicted and in love with his stepmother; and the deliciously promiscuous maid, Petra (Heidi Fredericks), who has her sights set on Henrik.

The simple set designed by Bruce Haasl creates the perfect air of mystery and romance. The orchestra lead by Troy Fisher provides elegant music for an ensemble of beautiful voices.

The chemistry between Kingsbury and Donnell is undeniable, and they both fit comfortably in their roles. Kingsbury, known for largely dramatic roles, plays Fredrik without dramatic flourishes, and Donnell is natural and unaffected. Her smile is worth the price of admission.

Penn combines innocence and sexuality to paint a wonderful portrait of Fredrik’s wife, Anne, and she has a strong, clear voice.

Cooper, just off his terrific turn as Jesus in “Jesus Christ Superstar,” shows his acting range and, if anything, his voice shines even more here than it did in “Superstar.”

Also deserving of special note is Mary Petzold, a longtime singer with the Seattle Opera and a performer on numerous Seattle musical theater stages, who lends her considerable talents to the role of Madame Armfeldt, Desiree’s wise, no-nonsense mother. She is simply grand.

Outstanding musical performances come from the ever-popular “Send in the Clowns,” the great ensemble work on “A Weekend in the Country,” and the one breakout, up-tempo tune, Petra’s boisterous and seductive “The Miller’s Son.”

This is not frothy entertainment. It is a fine play for sophisticated adult audiences.

I'm one who slowly came to love the show. I think it was because the first two times I saw it it was at a not very good community theatre. Then I saw a professional production and was blown away by it.