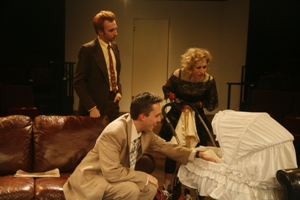 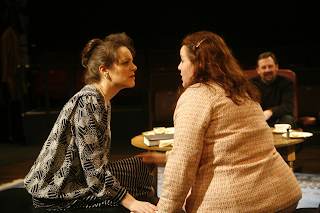 The “Absent Friends” play at Lakewood Playhouse is an excellent ensemble piece. It’s a tongue-in-cheek, irreverent comedy in which the love of close friends is severely tested.

Written by British playwright Alan Ayckbourn (“Absurd Person Singular” and “How the Other Half Loves”), “Absent Friends” reminds us that lost loves, anger, depression and betrayal can elicit cockeyed and humorous responses.

Colin (played with bright humor and natural poise by Mathew Vail, who fittingly is returning to Lakewood Playhouse after a four-year absence) is the absent friend who hasn’t seen his old chums in over three years.

Colin’s girlfriend recently died by drowning, and now Diana (Leischen Moore) has called all the old pals together to cheer him up. It’s a ridiculously dysfunctional group of friends who seem to need cheering up much more than Colin, who – at least on the surface – seems perfectly well adjusted.

For starters, Diana suspects her husband, Paul (Mark Lewington) is having an affair with John’s wife, Evelyn (Christian J. Doyle and Lisa LeVan). But when their ditzy friend Marge (Julie Drummond) confronts her while Diana is out of the room, Evelyn denies the affair, explaining that it wasn’t an affair but just a one-time sexual encounter on the back seat of his car, and he wasn’t very good. John, who is portrayed by Doyle as a man with some of the oddest nervous tics known to mankind, knows about his wife and his best friend but prefers to act like he doesn’t because he doesn’t want to jeopardize his business dealings with Paul.

Everybody’s quirks, foibles and secrets come to light after Colin arrives, including those of the other absent friends, who are never actually seen: Marge’s husband, whom we learn is fat and constantly sick, and Colin’s dead girlfriend, who was way too perfect to be real.

The set by Art Fick is a living room with doors to other rooms plus exits to the outside through which actors enter and exit. The flow of movement as blocked by director John Munn is seamless, well timed and seems tailor-made for the in-the-round setting of Lakewood Playhouse.

Diane Runkel’s costume designs do wonders in terms of highlighting the personalities of the characters – from the very normal-looking Colin and Paul to the bizarrely eccentric John and Evelyn.

Evelyn dresses like a punk teenager and wears makeup that makes her look like an extra in “Night of the Living Dead.” LeVan plays her with a marvelous set of slouching postures, bored expressions and a heavy cockney accent. When she flirts with both Colin and her husband, it’s a wonder they don’t both run for their lives.

Skinny with a shock of red hair and wearing an absurd pinstriped suit, Doyle jerks and twitches and walks like a manic windup toy and is hilarious in his bumbling attempts to speak.

Drummond plays Marge as a giggling and well-intentioned airhead who constantly says the wrong thing. And Lewington is believable as the tightly wound control freak Paul, who loses control of everything, most notably his wife, played with charm by Moore, who quickly flip-flops with one set of expressions for the audience and an entirely different set of expressions for her husband and guests. (It would be a stretch to call them friends).

This is a thoroughly enjoyable comedy – quirky, unpretentious and true to life.

This is the final weekend.