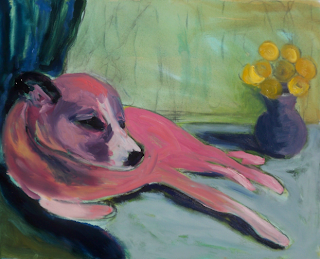 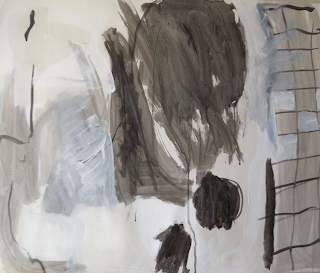 Now showing at the Washington Center in Olympia

Published in the Weekly Volcano, Feb. 26, 2009
Pictured: Garden Window, mixed media on paper, and Molly as Olympia, oil and charcoal on canvas
Photos courtesy of the artist

I went to the Washington Center for the Performing Arts to see the Afro-Cuban All Stars last week and was struck with the artwork throughout all three floors of the center. I’d seen a couple of Marilyn Bedford’s paintings recently in group shows at both South Puget Sound Community College and Tacoma Community College, but had never seen this much in one place.

I must say at this point that my companions were not in the least impressed, and I can understand why. Bedford’s paintings and monoprints are not exciting in any easily recognized way. Her subject matter tends toward the pedestrian, there is a kind of crude quality to her drawing that can be off-putting, and her images tend to have almost no hue or value contrast; which means that without giving them the long hard attention they deserve they tend to look rather boring.

Having acknowledged all of that, I really like her work. She’s an accomplished artist who seems to be true to her personal vision.

Due to the crowd there for the concert I limited my art viewing to the mezzanine and upper floors. There seemed to be three distinct series and, since the show is billed as a retrospective, I assume they’re from different periods. There are the dog pictures, some monoprint landscapes and a group of abstract paintings in mixed media on paper.

Her signature images, which I’m guessing are also her most recent, are the dog paintings. Each has a single dog in either a recognizable setting such as a home or isolated in a field of a single color. In the best of these there is a noticeable flattening of space with the dog seemingly pressed into the background. They also feature quirky placement of the dog, typically far to one side and to the bottom, making him appear tiny and lost in space. In some of these, such as one at the stairwell in the lobby, this odd placement does not work well; but when it does work well it works beautifully.

From my seat in the auditorium while waiting for the concert to begin I kept looking at one painting through the open door to the mezzanine. I was mesmerized by it. It’s an oil painting called "Molly As Olympia" and features a bright pink dog lying down against a dark blue curtain on the extreme left side of the painting with its legs stretched out toward a pot of yellow flowers in front of an acid green curtain on the right. Deep blue-black shadows create the impression that the dog is being stretched and pulled across the space of the canvas — implied dynamic movement in a figure at rest (that, by-the-way, is what made Michelangelo’s sculptures so arresting; not that I’m comparing Bedford to Michelangelo).

Also on the mezzanine is a group of abstract paintings on paper in muted tones of gray, white and black. I particularly like her scruffy brushstrokes in these, the combination of line and wash, and especially her use of transparencies and semi-transparent white over darker areas.

On the upper level there are a number of landscape monoprints in muted tones with practically no contrasts. Very dull looking upon a cursory glance, but amazing in how her brushstrokes create the feel of air and wind and clouds and rain without clearly delineating any of those.

Bedford sums up her work in a statement written for this exhibition: “The immediacy of painting, the fluidity of the material; the physical connection to the surface through the gesture of the brush is compelling to me. Spatial relationships activate the composition and are essential to the simplicity I seek. The importance of line is the connective thread in my work.

“I make art because I enjoy the physicality of it; the drag of the brush across a canvas, the feel, the smell, the getting your hands dirtiness of it all.”

She also makes some interesting statements about her choices of subject matter, but to me that is secondary to the physicality of the work.

Also showing in the Washington Center is a huge installation by Jeremy Zweifel called "Gordian’s Knot." It is a twisted entanglement of wood strips in circular and triangular formations that float in the open area between floors and simply has to be seen from all levels to be appreciated.

Note - two additional comments: First, as soon as this review was published and I saw it on www.volcano.com I realized that the photos seem to belie my statement that there was little hue or value contrast. It seems I picked the two images that most clearly contradicted my statement. Second, the title "Molly As Olympia" does not refer to the city but rather to a painting by Edouard Manet. The dog is playing the part of the naked lady in the Manet painting.
Posted by Alec Clayton at 7:37 AM

I would not be able to go to see the show, I am just too far away, but I like the abstract drawing that you have selected to post here.

ps I hope you don't mind but I have added the link to your blog to mine:
http://rawbubbles.blogspot.com/

I appreciate the link.