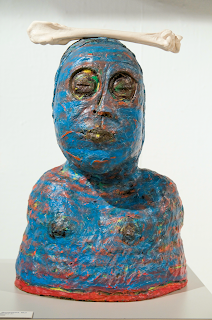 Evolution of art and humanity at The Grand Impromptu

Pictured:'Lucy Was A Bonehead, But She Still Believed In Evolution,' ceramic by John McCuistion.
Photo: Ross Mulhausen

I counted 48 artists in the Charles Darwin birthday exhibition, Evolutionary Tales, at The Grand Impromptu Gallery. In addition to the usual suspects, i.e., members of this artists’ co-op gallery, there is a huge lineup of guest artists as each member artist invited one guest artist, who in turn invited another and so forth up to six guests each. Among the many guests are a host of Olympia artists who rarely show in Tacoma. Including Marilyn Frasca, Susan Aurand, Shaw Osha, Kathy Gore Fuss and Susan Christian — and at least one Seattle artist, Larry Naylor, who was included thanks to arts promoter and former Seattle gallery owner Bryan Ohno.

Each artist is represented by a single artwork on the theme of evolution or a tribute to Darwin. Most of the works were executed specifically for this show, although I suspect some were simply given titles that fit the theme. A purely abstract painting by Shaw Osha, for instance, could be interpreted as anything your imagination can dream up. It consists of soft and sparkling geometric patterns in spray paint that look like patterns made by colored lights as seen through fog or, more prosaic perhaps, an atmospheric abstraction in pastel on soft paper. But with the title "On Doubt Charles Darwin: Recognition of Chance in Natural Selection" it fits within the theme of the show.

Similarly, Kathy Gore Fuss’s mixed-media abstract painting "Ravaged" is accompanied by a wall statement referencing the manner in which artists work as being akin to the process of natural selection. It is the first purely abstract work by this artist I have seen, and perhaps it represents a new direction in her work. Something like seed pods or rocks are embedded in rough paper that is sewn together. The texture, coloring and all-over design are attractive, but it seems the only relationship to the evolutionary theme is in the artist’s written statement about “my own little natural selection.”

My favorite piece in the show is an acrylic painting by Alain Clerk called "Couple." An artist’s statement describes it as “Thoughts of Darwin, of Evolution, of Man and Woman and how long Love, Sex and Courtship have been around, part of our fabric, still evolving perhaps . . . and to know that to love another is the beginning of wisdom.”

A couple sit together on a pink chair with arms intertwined in a loving embrace. The couple’s bodies are the same color as the chair and are delineated only by a scruffy outline that reminds me a lot of some of Matisse’s paintings and drawings and also of "The Kiss" by Brancusi. I love the line quality, the overall composition and the brittle dry paint strokes. The only thing I don’t like is the impressionistic hillside in the background with all the lights from, I supposed, a scattering of houses. The impressionistic style is not in keeping with the harsher and more expressionistic style of the figures, and the atmospheric perspective ruins an otherwise terrific composition.

Another favorite piece is Larry Naylor’s sculpture, "Sputnik Has Landed," ceramic, steel and fur. In this piece Naylor references evolution as mankind’s journey into the future through exploration, specifically exploration of space. His sculpture is of an automaton, half human and half machine, a mechanical creature made to explore unknown worlds — sort of a hybrid between R2D2 and a Mars Rover.

I also enjoyed John McCuistion’s ceramic sculpture "Lucy Was A Bonehead, But She Still Believed In Evolution." “Lucy,” of course, is the name given to a famous hominid skeleton found in Ethiopia in 1974. McCuistion’s figure is a ceramic bust of a primitive figure with a big bone sitting on top of her head. It is comical and thought-provoking. The body of the figure is painted with a wonderful peekaboo pattern of red-orange and blue.

I also enjoyed McCuistion’s wife, Dorothy’s, monotype "Darwin’s Dream," which she describes as imagining “the multitude of images and events that occupied Darwin’s dreams and lead him to his theories of natural selection.” In a wash of softly brushed colors are line drawings of a map and various animals and a portrait of Darwin. McCuistion does a good job of combining various styles in a unified whole. But I’m wondering why a portrait of Darwin needed to be included in a picture of his supposed imaginings. Not to pick on this picture, but overall there are too many Darwin portraits in this show, which seems too obvious an approach to the theme.

One final thing that has to be mentioned is that sculptor LeeAnn Seaburg Perry includes a newspaper article alongside her sculpture of a Madonna and child. It is no secret that the newspaper article with its story about this piece of marble sculpture is a joke. But it is very clever and I will not spoil it by telling what the article says. Seaburg Perry is a skillful and very sensitive sculptor with an obviously refined sense of form, but her style is so much like a number of earlier artists that I have a hard time getting excited about it. She borrows from Barbara Hepworth who borrowed from Rodin (specifically the figures he did which emerge from rough-carved blocks of marble) which Rodin borrowed from Michelangelo.

This week I read a review by New York Times art critic Roberta Smith of an Edvard Munch exhibition in which she often referenced other artists who influenced Munch and who were included in the show and said, “Again and again you realize that the best way to explain a work of art is with another one.” How true this is. Now matter how precisely I described LeeAnn Seaburg Perry’s sculpture, as just one of many possible examples, nothing could picture it so clearly as comparing it to works by Hepworth, Rodin and Michelangelo. And if you, dear reader, do not “get” the references, that’s why God invented Google.
Posted by Alec Clayton at 8:25 AM

Hi Alec,
I'm glad you liked my sculpture....though using fur is a good idea, my piece is composed of ceramic steel and tar. Actually feathers could be a good addition.
Thank you for the review,
Larry Naylor

Hi Larry. Damn. Sorry about the mistake. I could have sworn the label said ceramic, steel, fur. I made a note of it. Otherwise I'm glad you liked what I said about it.