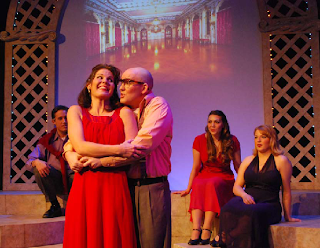 
The musical revue “A Grand Night for Singing” at Capital Playhouse in Olympia features songs from legendary songwriters Richard Rodgers and Oscar Hammerstein II. People who love show tunes – and especially those who love standards from such hit musicals as “Oklahoma,” “South Pacific” and “The Sound of Music” – will surely enjoy this performance. It is beautifully staged, clever, witty and, according to director Jeff Kingsbury, “wicked”; although I must have blinked during the wicked parts.

Is it possible to find fresh new approaches to songs so firmly associated with play scripts? According to the Capital Playhouse marketing director Stephanie Nace, that was the challenge presented to Walter Bobbie, who wrote this revue in 1994. She explained that Bobbie was challenged with finding new approaches to songs such as “Shall We Dance” that didn’t instantly conjure up images of Deborah Kerr and Yul Brynner twirling around the dance floor. Bobbie said the answer was to ignore the plays and their characters and think only of the lyrics. So he presented this romantic song as a comedy bit with a nerdy little guy dancing with a big, powerful and beautiful woman (Jerod Nace and Deanna Barrett in this production creating the impression of a big difference in size where it doesn’t physically exist). Similarly, it is a love struck youth (Jerod Nace again) instead of a gaggle of nuns who sings “Maria” from “The Sound of Music.”

Jerod Nace gets many of the plum comedic parts in this review, and he plays them all as if gleefully winking at the audience to say, “Just between you and me, this is all playacting.” He also slips in and out of various characters through the use of simple props, such as glasses and a bow tie, and subtle changes in posture and gesture.

While Jerod Nace gets the juiciest comic bits, Adam Randolph gets to sing most of the lush romantic songs. He has a strong tenor voice and the stage presence of great leading men in the Gordon McCray-Howard Keel mold. But he also easily slips into hilarious comic routines.

The ensemble cast is filled out with three terrific women: Barrett, Erica Penn and Megan Rozak, all Capital Playhouse veterans and all very talented as actors and singers.

Nearly all of the songs are love songs, and the arc of the play builds around the various stages of love from a kind of smart-alecky youth trying to pick up a girl (Jerod Nace singing “The Surrey with the Fringe on Top” from “Oklahoma” to all three of the women, to breakups (the women singing “I’m Gonna Wash That Man Right Out of My Hair” from “South Pacific” in a style reminiscent of the Andrews Sisters), to the joys and challenges of raising children (Penn and Jerod Nace singing “When the Children Are Asleep” from “Carousel” and Randolph singing the beautiful “My Little Girl” also from “Carousel”).

Highlights of the show include a jazzy “Honey Bun” (“South Pacific”) with Randolph singing the lead and the whole cast joining in with voice instruments mimicking a jazz quintet, and the beautiful and inspirational ensemble performance of “Some Enchanted Evening” from “South Pacific” at the end of Act 1 and the finale medley of “Impossible” (“Cinderella”) and “I Have a Dream” (“The King and I”).

The set by Bruce Haasl is a simple and elegant arrangement of risers and lattice arches that sparkle with tiny lights, mood-setting images projected on a scrim and occasional swirling disco-ball effects (lighting by Matt Lawrence). The music by the six-piece group led by Troy Arnold Fisher sounds like a much fuller orchestra. And by the way, the sound balance between singers and orchestra, which is often a big problem in musical theater, is perfect here. For this, we can thank Fisher, Kingsbury, sound designer Bob Schwenkler and sound board operators Eddie Carroll and Alayna Deatherage.