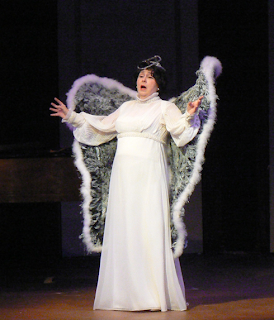 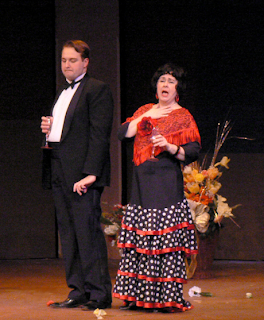 
I had high hopes for “Glorious” at Tacoma Musical Playhouse. The true life story of Florence Foster Jenkins, billed as “the worst singer in the world,” seemed tailor-made for a musical comedy, and Sharry O’Hare as Jenkins and Josh Anderson as her pianist, Cosme McMoon, seemed inspired casting.

I was slightly disappointed that the play was not as outrageously funny as expected. It is comical, but just not as funny as I had hoped.

The real-life Jenkins had dreams of becoming a great opera diva, but she was a terrible singer. Audiences laughed at her as she butchered the works of Mozart and Strauss, but she continued to see herself as a great soprano.

As she is written in the book for this play, Jenkins was not only a horrible singer, she was totally clueless. She thought the people who jeered at her were “enemies” who were jealous of her talent, and to protect herself from these enemies she went so far as to audition each audience member before she performed.

Only people who loved her singing were allowed to attend her concerts. Naturally, they pretended to like her in order to get in, and then they made fun of her. O’Hare does a wonderful job of terrible singing, like a kamikaze pilot dive-bombing pitch and rhythm.

Some of her songs are truly funny, but it’s a one-punchline joke that wears a little thin. Added to the terrible singing, her posture, her walk and her hand gestures capture the spirit of a wealthy, pretentious and totally oblivious society dame.

Jenkins’ cluelessness extends to her pianist, McMoon, who is gay. Like Paul Lind on “Hollywood Squares,” McMoon’s gayness is a joke shared with the audience. He knows he’s gay and plays it to the hilt, so the audience gets it when he references code phrases such as “a friend of Dorothy” and Jenkins has no idea what’s so funny. Anderson plays this bit with great comic timing and outlandish expressions that only the audience sees.

I have criticized other plays for the use of offensive anti-gay jokes. But the gay jokes in this one are affirming and not offensive, and actually provide for some of the best laughs in the play. Anderson plays McMoon as an absolutely loveable character.

Some of the supporting characters are weak despite having good actors in the roles. Some great talents are wasted here. Dollarhide, for instance, is a singer who has spent a decade as lead soprano with Tacoma Master Chorale, but her singing ability is barely used in this play.

She sings a couple of verses in one song, and that’s all. And Valenzuela, who has performed with the Seattle Opera, does not sing at all. What she does get to do is curse a lot in Spanish (with witty translations projected onto a panel in the wings).

The only supporting character who has much of a meaty role is Birkeland as St. Clair, who lusts after all the women. And the dog. The dog has some of the funniest bits in the play, but I will not spoil the fun by telling about them.

The sets by Will Abrahamse utilize rich drapery, a profusion of flowers and lush antique furniture to create the ambiance of a society dame’s apartment and concert halls. The costumes by Joan Schlegel, particularly the cheap and pretentious handmade dresses worn by Jenkins and Dorothy, are really tacky and silly, as they are intended to be.

This is the first TMP production I have ever seen without an orchestra led by musical director Jeffrey Stvrtecky. The only musical accompaniment is Anderson’s piano, and he plays nicely.

The real life Cosme McMoon was famous for making faces at Florence Foster Jenkins behind her back during her concerts, thus egging on audience members who came to laugh at her.

I was hoping to see some of that from Anderson, but perhaps it’s best that they didn’t play it that way; it might have been too cruel. Instead, Anderson’s McMoon gradually comes to love and respect her. The play ends with a touching tribute to Jenkins from McMoon.