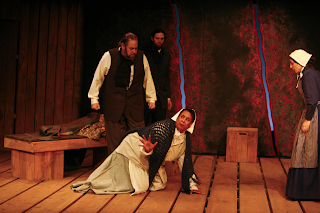 
Arthur Miller’s classic drama “The Crucible” at Tacoma Little Theatre is as relevant today as it was when it first played the boards in the 1950s. Now as then, it is an evening of unrelenting horror -- not the horror of slasher and vampire films but the more real horror of human beings throwing their friends and neighbors into the crucible of hijacked justice.
Written as a thinly-veiled analogy of the Communist “witch hunts” led by the late Sen. Joe McCarthy in the 1950s, this story of real witch hunts in Salem, Mass., in the 17th century can now be seen as analogous to more recent uses of torture to coerce information from prisoners or as analogous to tactics used to slander political enemies by accusing them of being unpatriotic, and even in TV police dramas where questionable interrogation tactics are becoming increasingly acceptable.
From 1692 to 1693 150 people were prosecuted for witchcraft in Massachusetts. People lied and accused their friends and neighbors, and innocent people confessed to avoid death by hanging. In Miller’s play innocent people were put to death because one vengeful young girl, Abigail Williams (Kate Muldoon) accused them of witchcraft. What began with vengeful accusations against a handful of people grew to involve almost every family in Salem Village. Twisted accusations grew to hysteric proportions, sucked others in as ‘true believers’ and witnesses lied to protect themselves and, in some cases, their reputations; because for some of these people their standing in the community was more important than truth or justice or even life.
Most dramatic plays have at least a few moments of comic relief, but not this one. That may be historically accurate, as history indicates the Puritans were generally stern and humorless people. But it’s hard on most audiences to sit through that much intense drama, although there are those who love nothing better. It’s a long play, close to three hours including intermission, and during that time the shouting becomes so routine that at times it loses its power.
The set by Doug Kerr is dramatic and beautiful. It is stark and minimalist with a few rough wooden boxes on heavy wood slat floors that allow for dramatic lighting between the slats, and a painted backdrop with moveable sections. The set creates a feeling of surrealistic timelessness that emphasizes that even though it is a period piece, the issues do not go away but keep reappearing in different forms throughout history. Lightning like neon and red light seeping through the floorboards lend to the surreal and hellish quality of the set.
Erik Hill is outstanding as the farmer John Proctor, as is Rachel Boyer as his wife, Elizabeth. They both seem natural in their roles -- much more down to earth than the self-important preachers and judges, but no less intensely emotional.
Robert McConkey is perhaps a little too stiff and too bombastic as the preacher John Hale, although such a character would be stiff and bombastic, and he softens in a realistic manner as he begins to understand that innocents are being destroyed by the witch hunt.
Joseph Grant as Deputy-Governor Danforth and Michael Dresdner as the Rev. Samuel Parris are also outstanding, as are some of the actors in smaller parts, most notably Jane McKittrick as Mrs. Ann Putnam and Sarah Good, John Pfaffe as Giles Corey, and Krista Grimmett as Tituba, the voodoo-practicing slave from Barbados.