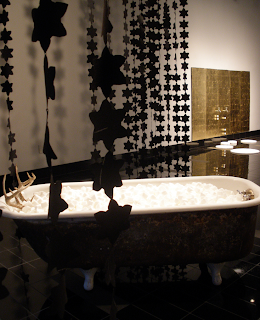 An elegant installation at SPSCC


Last week I identified a painting as a flower painting by Elliott Ficus. Actually it was a painting of a Ficus by Eric Elliott. My mistake. I mistook the name of an image file for the artist’s name. So now that we know who he is I recommend you see "Ficus" and other paintings by Eric Elliott in the Northwest Biennial at Tacoma Art Museum.

Now on to another show. This one is a one-person show, so I hope I can get the name right. It’s "Depletion 2009," an installation by Amy Johnson at South Puget Sound Community College. According to the gallery Web site, “… Johnson uses installation art to explore the tension between the myths and realities embedded in her Southern heritage and the cultural expectations for women.”

That sounds intriguing, but I saw nothing in this show that had anything to say about either Southern heritage of cultural expectations for women. Perhaps I was just not grasping the meaning of these works.

What I did see was bathtubs. And salt. Lots and lots of salt. Salt has obvious connections to the title, "Depletion." It dissolves (is depleted), but it also preserves and refreshes and restores, as does a soak in a hot bath.

This is a very sparse and elegant show. It consists of two modest installations, each of which is a kind of diorama depicting bathrooms. In one an antique claw foot, cast iron tub is curtained with black stars cut out of tarpaper and hung like bead curtains. The tub is filled to the brim with white salt cubes, the size and shape of which made me suspect they were molded in ice cube trays. A set of deer antlers sticks out of the salt at the foot of the tub. It’s a bubble bath for a deer, and Bambi is completely submerged.

Both pieces use texture, color and — most importantly — a highly developed sense of spatial placement of objects to create the impression that these bathrooms come from a mansion from perhaps 200 years ago. You can almost see the lady of the house languorously soaking in the tub.

The only other things in the show are a set of collages used as preliminary studies for the installation. One group of three collages depicts the bathtub in three different configurations: empty, full of salt cubes and with the salt cubes drained out onto the floor. In each there is a single tub, very small and collaged from bits of what looks like a paper doily, set in a vast field of black sumi ink.

This is a quiet, contemplative show that speaks metaphorically of loneliness and wealth. Perhaps the connection to Southern heritage is it’s a metaphor for a Southern belle trapped in the gilded cage of an antebellum mansion.