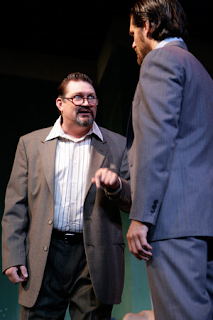 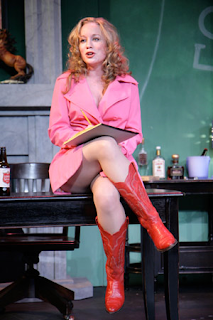 Psychopathia Sexualis” has to be one of the most misleading titles ever. Borrowed from the book “Psychopathies of Sexuality” by Richard von Krafft-Ebing, the title implies a dark and brooding look into sexual perversion. But this play is a witty, urbane comedy written by John Patrick Shanley, the Pulitzer Prize-winning author of “Doubt” and screenwriter of the hit comedic films “Moonstruck” and “Joe Versus the Volcano.”

It is now playing at Harlequin Productions’ State Theater in Olympia.

It is a short play and fast moving. With snappy dialogue and minimal set changes, it is over so quickly that it almost feels like a television sitcom – but it’s more intelligent than most sitcoms.

Arthur (Ricky Coates) is a painter. He is engaged to Lucille (Anne Kennedy), a sexy, John Wayne-worshipping Texas cowgirl who reminds me so much of Marilyn Monroe in “Bus Stop,” although she doesn’t ooze quite so much innocent sexuality as Monroe. And when she does flaunt her sexiness, it is with much more contemporary self-awareness.

As the wedding date approaches, Arthur becomes panic stricken because of his one big sexual flaw: He can’t make love unless he has his father’s argyle socks within reach, and his psychiatrist, Dr. Block (Russ Holm) has stolen his socks – all of which Arthur tells his best friend, Howard (Brandon Petty), who immediately blabs it to his wife, Ellie (Casi Wilkerson), who in turn “innocently” lets it slip to Lucille.

The play is tightly constructed with a series of mostly two-person face-offs – first Howard and Ellie at home, then Howard and Arthur (when Arthur confesses his fetish), then showdowns between Howard and Dr. Block, and then between Lucille and Dr. Block.

The cast is excellent. Coates, Petty and Wilkerson are all skilled professional actors who bring their characters to life, although I thought Petty would have been better if he had toned his acting down just a little. The brightest sparks in this modest little comedy, however, come from Holm and Kennedy.

Holm is well known to Harlequin regulars. Going back at least to 1995 and Harlequin’s first production of “The Rocky Horror Show,” in which he played Riff Raff (a role he reprised this year), Holm has been a favorite actor in more than a dozen Harlequin productions. He pulls out all the stops in this performance, painting Dr. Block as the most demented psychiatrist imaginable, a kind of hybrid between Hannibal Lecter and Sigmund Freud.

His gestures and timing are spot-on, pushing right up to the edge of playing the evil doctor as a stereotypical, mustache-twisting evil villain, but never quite stepping over that line.

This is Kennedy’s first outing with Harlequin, but she’s no stranger to Puget Sound-area theater, having performed at Taproot, Seattle Rep, Centerstage and others. She is charming and vivacious. She first appears onstage sitting at a desk with her feet propped up, wearing a white wedding dress and red cowgirl boots while looking worshipfully at a portrait of John Wayne. She puts on a believable Southern drawl, and you know from the moment she opens her mouth that she is smarter and more self-possessed than her cowgirl demeanor would imply – like a savvy modern woman hiding inside Annie Oakley. The confrontation between Lucille and Dr. Block in which she melts his evil heart is the most delightful scene in the play.

First-time Harlequin director Marianne Savell does a great job with this one, as does scenic designer Jill Carter. Carter’s set is a New York apartment, which doubles as a psychiatrist’s office. The walls are painted a warm green and decorated with a kind of modern-day hieroglyphics comprised of symbols and psychological terms. I particularly liked the doors and windows, which get larger at the top as if seen from a worm’s-eye view.

The crowd opening night was rather sparse. I suspect that was because nobody knew what to expect. If more people find out that this is a witty and intelligent romantic comedy and not the dark play about sexual perversion suggested by the title, they should be able to fill the seats.