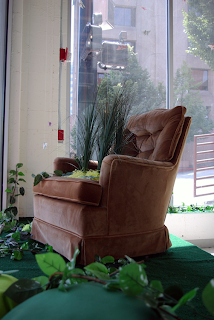 Summer installations in the Woolworth Windows

Benine’s work is beautiful and fraught with meaning although the “meaning” would be meaningless without the explanatory wall text. Two-hundred and sixty-seven unfolded photograms are placed together in a quilt-work pattern that completely covers one wall and folds out onto the floor. The pattern is like a great big kaleidoscope with bright orange, brown and white starburst patterns on a black background. It is strikingly beautiful as an abstract pattern, and then when you read the wall text you discover that each section is a peace crane, the total of 267 representing the number of people with Washington state ties killed in Iraq since the war began in 2003.

Bookwalter’s work is an exhibition of images screen printed onto sheets on transparent latex rubber, exploring the basic forms of the five convex regular polyhedrons known as the Platonic solids. There are five works filling the back walls in the largest of the windows. The geometric forms are printed in red, white and blue with illusions of depth created by overlapping and juxtapositions of lighter and darker lines. These are very complex forms made up of simpler forms — triangles and pentagons. The latex sheets are cream colored, and the white lines in particular have the illusion of being behind the sheets and showing through in a ghostlike manner. The overall effect is that of geometric forms randomly floating in space and eventually coming together to create more coherent patterns. Quite fascinating. The press release says, “Bookwalter is interested in showing the viewer that all of humanity’s technological innovations have evolved from something as simple as a triangle.”

The Bochicchios’ Curb Appeal is intended as a commentary on the troubled housing market. It’s the back side of a house, painstakingly constructed with a small deck and even such minute details as electrical outlets. “By showing the most ignored part of a house,” the press release states, “the two hope to expose some of the more neglected aspects of territorial consumer culture.” Perhaps some other viewers will get it, but to me it seemed like an awful lot of work with no appreciable result.

The same holds true, in my estimate, for Berner’s Wallow installation in the Commerce side windows. It is a surrealistic and fanciful depiction of nature invading the interior of a house. It looks like a set for the stage version of Frances Hodgson Burnett’s The Secret Garden.

Against the back wall is a large picture window, curtained, with nothing showing through. Are we looking inside-out or outside-in? It’s impossible to tell, and that’s the only intriguing thing about this installation. In front of (or outside of?) the window, birds or butterflies hang from the ceiling. Plastic plants sprout on the floor, and there is a big, old easy chair with grass growing out of the seat cushion. That’s about it. It’s an imaginary concept, and if it looked more realistic it would be marvelous. But it just looks like plastic flowers and origami birds and a very fake looking window. Sorry. Good try.

To give credit where credit is due: I may have been left cold by the Berner and Bochicchio installations, but at least they treated the windows as installation space and not just any old place to exhibit their art, and their works were cohesive expressions of concepts. I just thought they lacked visual impact.

[The Woolworth Windows, Commerce and Broadway at 11th, Tacoma, open 24/7]
Posted by Alec Clayton at 6:10 PM