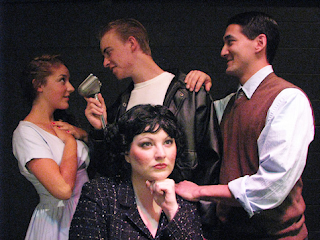 ManeStage Theatre Company in Sumner is a new theater company in its first season. It’s described as “a family of creative artists committed to producing dynamic drama that enhances the moral imagination.” ManeStage offers amateurs and beginners in theater an opportunity to work with and learn from more seasoned actors and directors. As stated in the program, some of the actors and staff are “mothers and daughters, cousins, school friends or husbands and wives.” As such, professional-level performances should not be expected, and that is fine.

Unfortunately, in their third production of their first season, I’m afraid they chose a silly musical that is not well written and is filled with lightweight music of the type often referred to as bubblegum. The play is “Bye Bye Birdie,” a 1960 Broadway musical with book by Michael Stewart, music by Charles Strouse and lyrics by Lee Adams that was made into a movie starring Janet Leigh, Dick Van Dyke and Ann-Margret in 1963.

People who are old enough can remember when Elvis Presley was drafted into the Army. The music industry thought it would be the death of rock ’n’ roll. Fans were devastated. This is a story of a rock ’n’ roll star in the Elvis mold, Conrad Birdie (played by Connor Hagen), who is drafted into the Army. His manager, Albert Peterson (Paul K. Hill) dreams up a publicity stunt involving a last kiss from Conrad before he goes off to the Army. The lucky girl who is to get kissed by him is Kim MacAfee (Austen Case), the president of his fan club in the little town of Sweet Apple, Ohio. But complications arise because she has a jealous boyfriend and an over-protective father. And there is a subplot involving Peterson’s secretary Rose Alvarez (Brenda S. Henson) who is in love with him and how that does not sit well with his overbearing mother, Mae Peterson (Diane Lee Bozzo).

Henson is the co-founder of the theater and the wife of the director, Jay Henson. Her professionalism is obvious. She acts with conviction and has a full, throaty singing voice. I noticed that a lot of the female singers sounded shrill on the high notes and crescendos, some of which may be the fault of the sound system, which was awfully loud. Case also has a beautiful voice, but she also sounded too shrill at times.

I also thought that there was a lot of overacting. That’s a tough judgment call because some of the comedic bits were supposed to be broadly acted. Bozzo as the mother and Tyler Lockwood as Mr. MacAfee were characters who called for, if not overacting, at least pushing it right up to the edge. At moments, their antics were funny but at times, especially in the case of Lockwood, I thought it was overdone. I also thought Hill overacted. In the opening scene, for instance, he did a lot of running up and down stairs and all around the set, none of which seemed appropriate to the scene.

There were good things, too. I thought Hagen was good in his musical numbers, especially “Honestly Sincere” – a song in which he is anything but honestly sincere – and also on “A Lot of Livin’ to Do,” which was recognizable as a takeoff on the Elvis song with the same title. Hagen played his part with a good Elvis sneer and hip thrust.

Bozzo did a really nice job of playing the stereotypical meddling mother, playing the martyr when she feels rejected by her son.

A couple of young actors who really shined were Andrew Reed as Randolph MacAfee and Brooke Aker-Inabnit as the sad girl. Her dance number with Hill to the tune of “Put on a Happy Face” is one of the sweeter moments in the play. And Reed’s antics on the song “Kids” (and even more so on the “Kids” reprise) was the comic highlight of the play. Also outstanding in a smaller role was Paige Mitchell as Ursula who was vivacious overall and a standout in her opening song.

The teen chorus was good overall, and most of the production numbers involving the whole cast were well done.

It’s silly, lighthearted and flawed, but there are certainly some entertaining moments, and as this new theater ages it might prove to be a welcome addition to the South Sound theatrical community.