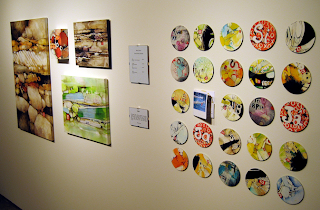 Mindy Barker’s Slice at Fulcrum Gallery is a series of five paintings on glass that hang from the gallery ceiling, two more paintings done directly on the gallery windows, five separate and slightly different paintings in the front gallery, and four smaller paintings and a series of 25 painted compact discs in the small back gallery. Let’s look at them part by part.

But first, let’s look at what they all have in common: photographs and/or pieces of photographs either collaged or photo-transferred onto the surface of the paintings and sandwiched between large rocklike forms. The rock shapes dominate the picture surfaces and are painted with soft value changes, which give them a fully rounded appearance and are often combined with dark, cavelike openings. The photographs are jammed into these openings and often look as if they are in danger of being crushed. In some of her paintings these forms appear to all be on the same plane; in some there is an illusion of depth; and in at least one, Red Java, the rock shapes are bulbous, breastlike forms that appear to advance forward as if visually bursting out of the confines of the canvas. This painting, by the way, is my favorite in the show.

These paintings are inventive and intriguing, begging the question: What is the meaning of these photos of people and objects, and why are they placed within abstract paintings in such strange ways? Barker’s use of illusory space is problematic. In some, the depth and the density are almost overwhelming, creating holes that disrupt the composition. But in most she pushes right up to that precipice without falling in. It’s a dangerous and effective balancing act.

The paintings on glass represent a new direction for Barker, something I’m told she has never done before. They are hung as a group and lighted in such a way that each painting is duplicated in its reflection against the gallery wall; plus, all of the paintings can be seen through one another so that the five hanging glass panels and their reflections and shadows become a single work of art. But that’s not all. The paintings on the window are in the same style, so when looking through the windows from outside they also become part of a unified installation.

In the Best of Tacoma issue of the Weekly Volcano I chose Fulcrum as the best gallery. Its last show and this one are proving me right. There will be an artist’s talk Sunday, Aug. 31, from 6 to 9 p.m.