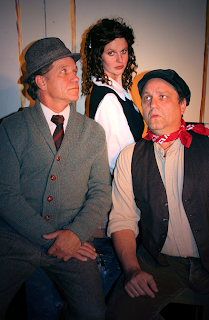 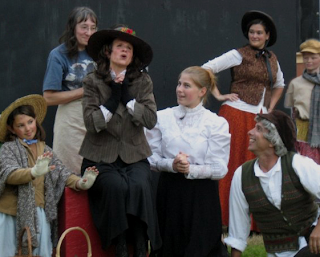 "My Fair Lady" at Encore! Theatre

Henry Higgins and Eliza Doolittle traipse South Sound stages once again, this time on Encore! Theater’s outdoor stage at Impact Church International in Gig Harbor. As in the earlier performance this year at Centerstage in Federal Way, I was impressed with many of the principal actors and once again enjoyed hearing those classic Lerner and Loewe songs. But also, as in the earlier performance, I found myself during much of Act II wishing they would just hurry up and get to the end. Unfortunately, they can’t rewrite copyrighted material to make it more palatable to impatient modern audiences. But three hours is a long time to sit through anything, and scenes such as the upper crust waltzing at the ball get awfully boring.

On the other hand, Henry Higgins and Eliza Doolittle still comprise one of the most entertaining couples ever dreamed up by a playwright, and Ted Fredericks as Higgins and Mandi Wickline as Eliza are terrific – especially Wickline. I can’t imagine anyone being a better Eliza Doolittle. Her handling of the various accents, her expressive face and her voice are all perfect. When she begins her first song, “Wouldn’t It Be Loverly?” she sounds like Julie Andrews, but when she goes into showstoppers such as “The Rain in Spain” and “I Could Have Danced All Night,” she proves to have an even stronger voice than Andrews.

Fredericks does not carry the show with quite as much style and grace as does Wickline, but he is a talented actor who really throws himself into his comedic bits. He comes across as crotchety and pompous (even while belittling the pomposity of others) and self-centered, but loveable despite his many flaws – which is exactly how the character should be portrayed. He also has a very interesting singing voice that goes from mellow and sweet to harsh and gravelly. This is particularly effective in songs like “I’m an Ordinary Man,” in which he sings about the many contradictory aspects of his personality. I personally found the harsher aspects of his voice to be irritating in places, but overall entertaining. I think he’s at his best in tender love songs such as “I’ve Grown Accustomed to Her Face.”

Henry and Eliza carry the show. The secondary characters are good but not outstanding. Sylvia Shaw is great as Henry’s mother, and Eric Emans as Freddy Eynsford-Hill sings up a storm on his one big number, “On the Street Where You Live.” Also turning in commendable acting jobs in minor roles are Phyllis Kappus as Mrs. Pearce and Sharon Eason as Mrs. Eynsford-Hill and in various ensemble roles.

I have mixed feelings about Darrel Shephard as Alfred Doolittle. He’s good in spots but just doesn’t put enough oomph into it. And Patrick Gerrells has a hard time pulling off the role of Colonel Pickering. Throughout the play, there are uncomfortable pauses in his dialogue, and I couldn’t tell whether that was from an attempt to play Pickering as shy and bumbling or if he was struggling to remember his lines.

Pianist Meredith Shanley is also to be commended, and I thought the balance of her piano playing with recorded background music is well done.

The costumes by Becky Michalski, Sylvia Shaw and Deborah Emans are great. The main part of the set, which is Higgins’ home, is also excellent. Designed by Jim Cave and Dave Michalski with scenic painting by Kristi Riker, it features a wonderful painted backdrop and converts nicely into an elegant ballroom. Off in the wings – actually in the grass in this case – is another set representing the street scene with opera house and pub, which they didn’t pull off as well – it is tacky, thrown together and cheap looking.

The outdoor stage is huge, and I often wish the people at Encore! Theater didn’t feel like they have to use every inch of space, including the grass in front of and to the sides of the stage. It often spreads the action out too much, thus destroying a sense of intimacy. It also means it takes actors forever to get on and off stage. The flip side to that is that without spreading out so much they may not have sufficient seating for the audience.

Bring blankets, folding chairs, mosquito spray, food and drink and be prepared for a long night.
Posted by Alec Clayton at 6:16 PM