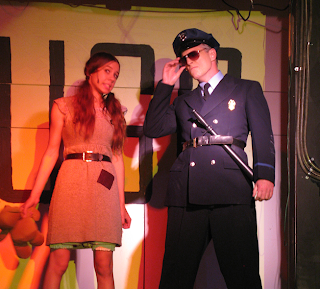 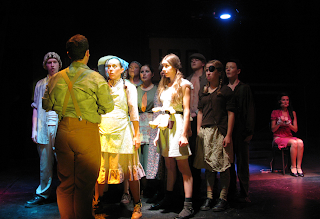 I have seen three performances of “Urinetown” presented by three different theater companies, and all of them were wonderful – which is a tribute not only to a terrific script with fabulous music, but also to the wealth of talent to be found in the South Sound.

The latest performance of this gem is at Paradise Theatre in Gig Harbor, and believe you me, this cast knocks itself out. The direction by Jeff Richards – especially the blocking of the ensemble cast – and the choreography by Vicki Richards are outstanding.

This husband-and-wife team also does a great job on lighting (Jeff) and costumes (Vicki). The costuming and makeup on the rebellious rabble is particularly effective – both believable and comic, except for the very fake-looking beard on Old Man Strong (Dennis Caswell, who did a good job of acting in a small part even with the ludicrous beard). Watch for the eerie otherworldly lighting effects when a certain character appears from beyond the grave.

Good material brings out the best in good actors, and Paradise Theatre’s “Urinetown” certainly has both. The story is complex and nuanced yet easy to follow, with a mixture of satire, slapstick and heroic and tragic drama. It is a love story in the “Romeo and Juliet” mold, a dramatic epic a la “Les Misérables” and a parody of Broadway musicals that could have been, but wasn’t, written by Mel Brooks (book and lyrics by Greg Kotis, music and lyrics by Mark Hollman). And it spoofs such popular musicals as “West Side Story,” “Fiddler on the Roof” and “Les Misérables.” And most of all it spoofs itself.

Stepping in and out of character to serve as narrator, Officer Lockstock (Ian Lamberton) tells the audience that what they’re witnessing is not real; it’s a musical, and not a very happy musical at that. Prodded by the impertinent and lovable Little Sally (Krista Curry), Lockstock explains that of course Hope loves Bobby. She has to because he’s the hero of the story; and when things get complicated and Sally is worried, Officer Lockstock assures her that everything will work out in the big musical number in the second act, because that’s what musicals do. You gotta love it.

The story is set in some future time in which the giant UGC Corporation, aka Urine Good Company, controls all public amenities, and the masses are forced to pay to pee. If anyone is caught sneaking off into the bushes to relieve themselves, they are exiled to Urinetown (which really means they’re thrown off the roof of the high tower that is home to the UGC corporation).

A young man named Bobby Strong (Ryan Demerick) leads the rag-tag masses in a revolution against the powerful UGC, which is run by the evil Caldwell B. Cladwell (Howard Knickerbocker). Cladwell’s innocent and idealistic daughter, Hope (Katin Jacobs-Lake), who has just graduated from “the most expensive college in the world,” falls in love with Bobby and becomes an unwitting pawn in the struggle between Bobby and her father.

You’d think the good guys would win out. Isn’t that what always happens in musicals? But remember that Officer Lockstock has repeatedly reminded us that this is not a happy musical.

The whole cast, with a few minor exceptions, is excellent.

Carrie Nelson is Penelope Pennywise, a rough, no-nonsense woman who has sold out to the UGC Corporation. She is big, brash, and strong. She belts out songs like “Privilege to Pee” with a powerful voice and a vicious sneer. You’d think this role was written with her in mind.

Demerick also comes across as tough, but with a heart of gold as the hero, and he has a nice jazzy singing style. He harmonized beautifully with Jacobs-Lake on ballads like the touching “Follow Your Heart” and rocks out on the gospel tune “Run, Freedom, Run.”

Jacobs-Lake is believable as the multidimensional Hope, who is torn between the opposing factions. And she has a lyrical soprano voice that carries well over the chorus.

Curry is funny as Little Sally. She plays this child something like Lily Tomlin as Edith Ann on “Laugh-In,” and she dances with wild enthusiasm.

Knickerbocker interestingly resists the obvious temptation to play Cladwell as a stereotypical bad guy, which I think is a good move.

Finally, Stephanie Ronge in the double role of Little Becky Two Shoes and Ms. Millennium is simply fabulous. Her energy and facial expressions put her right up there with Little Sally as the most lovable characters in the play.

Kudos to Paradise Theatre. This show is a must-see.