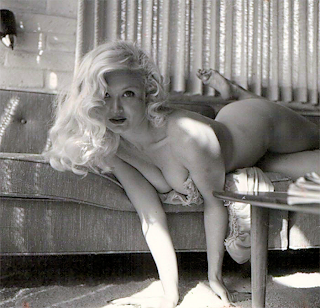 
Ever see a bombshell up close and personal? It will blow you away.

Half a century ago the word bombshell was slang for a buxom broad, a big-boob beauty. Marilyn Monroe was called a blonde bombshell. Get the picture? Well, you will starting Saturday, Aug. 16, at Rebecca V Gallery on Sixth Avenue.

The Bombshell exhibition features vintage pinup photography from the ’50s selected from gallery owner Tony Valenzuela’s private collection. “These photographs exude a fun, innocent and even humorous sensuality that you don’t get from today’s work. There’s nothing perverse here, just a beautiful form of art,” says new gallery director Odessa Poole — who is herself quite a beauty, but in a slim and hip 21st-century fashion, which is quite different than the standards of beauty exemplified in this show.

Poole and Valenzuela were kind enough to give me a preview of the show. At the time, Valenzuela was in the process of printing photographs. He had completed about half a dozen large prints on canvas, all in black and white except for one that was printed both in black and white and in sepia tones (none are color photos). In a small room off the main gallery were a few smaller framed prints. Valenzuela says the show will include 25 to 30 large prints on canvas ranging from 24 by 30 inches up to seven or eight feet and approximately 20 smaller prints (12 square inches on paper, framed). All of them date from the 1950s. Many of the photographers are unknown; most were from California, but some come from England and other countries.

Very little retouching went on back then. Cosmetic imperfections that would never be allowed in glamour photography today are quite evident. Dirty feet are especially noticeable. There are a lot of blondes, and most of them are big breasted. And they wear heavy makeup, especially lots of mascara and dark lipstick to accentuate pouting lips.

Most of the models are seminude, and in very few does pubic hair show, because that was not allowed in the “girly” magazines of the day. A lot of them are wearing garter belts and stockings and fancy dress gloves. Most of the poses are very carefully set up to look natural as if these women were caught off guard lounging in their bedrooms or playing in their backyards — as if they regularly slither so seductively atop their satin sheets at home.

One set of four photographs I saw looked particularly candid. The model was caught dancing in her backyard with a set of castanets and wearing nothing but a floral-print skirt. Another photo, obviously not candid, pictured a naked woman playing an arcade game with a group of clothed men. She seemed perfectly unaware of her nakedness, and not a one of the men was looking at her size 40-D breasts.

Studio lighting is used to simulate natural light, and every prop is carefully composed. The focus is soft but not blurred to create a luxurious feel. Among the samples I saw, only one would be considered inventive today. It’s a picture of a model on a railroad track bending over to create an A shape with her body. The rest are excellent examples of what was considered artist nude photography in the 1950s.

There will be live pinup models, classic cars and refreshments at the opening event Saturday, Aug. 16, starting at 4 p.m.