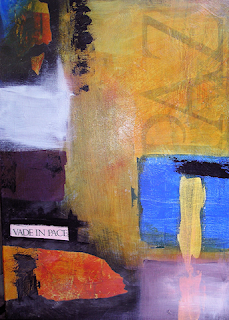 The old and the new at Gallery Madera

You could call this show the old pro and the hot new upstart. Gallery Madera calls it Apophenia, which according to the gallery Web site means “the spontaneous perception of connections and meaningfulness in unrelated phenomena.” According to Wikipedia, it means “the experience of seeing patterns or connections in random or meaningless data.” To me it just means two damn fine painters in the abstract expressionist tradition — Dale Witherow and Angel (Fred) Matamoros.

Witherow has been painting just about as long as Matamoros has been alive. He retired from teaching after 30 years as an associate professor of art on the East Coast. Mostly known for colorful abstract paintings with rich surface textures, in this exhibition he is showing both abstracts and traditional landscapes. Most of his paintings are solidly constructed with organic forms in an open grid structure, rich textures and strong dark and light contrasts. Influences from Kline and Motherwell are in evidence, especially in works such as Crucible, in which dark organic forms snake around and through a light central area. It is almost like looking into a cave but with the interior space being light and the forms inside being dark.

Another interesting — and stylistically quite different painting — is Boundaries, in which flat asymmetrical forms in bright, dark colors are arranged on a surface that modulates from light blue to gray to white. The forms here are very tightly controlled and remind me a lot of Richard Diebenkorn’s Ocean Park series.

In previous shows, Witherow’s paintings have been more brilliantly colored and slightly more bombastic. These are toned down a bit with more emphasis on structure than color. His landscapes are serene and simple.

Matamoros is the newcomer. Experienced as a photographer and graphic designer, he is relatively inexperienced as a painter. I know from talking to him that as recently as a couple of years ago he saw himself as a rank amateur. But you’d never believe it from looking at his paintings in this show.

This work is as strong as that of any of the more experienced painters around here or anywhere else. If he lacks training and experience, he makes up for it with an innate sense of color and design and a feel for the edge and surface qualities that define good painting.

Matamoros shows works in three similar but distinct styles: printed and collaged words (much in Spanish or Latin) embedded in textured surfaces with washes of semi-transparent paint, minimalist paintings with large bands of color juxtaposed with flat rectangular shapes, and atmospheric paintings with monochromatic color schemes. The atmospheric paintings are the least interesting — soft and mushy in comparison to the others. The works employing printed words are delicate and intricate and, for people like me who know only a smattering of Spanish and Latin, mysterious. In some of these he combines delicate transparencies with solid slabs of color, most noticeably in paintings such as Paz, which has layers of bright blue over an orange field and below it a square of soft, milky violet. His strongest works by far are the minimalist paintings with big, flat bands of color. My favorites are Suspiro Del Moro and Rue St. Philip. The first of these features three light blue squares floating in the upper right quadrant of a large field of muddy brown paint. The blue squares seem to hover in space and yet, at the same time, appear to be solidly locked into the ground. Rue St. Philip is three simple bands of solid color: orange, yellow and green. These two paintings have a lot in common with Cory Ryman’s sculpture, which was seen at Traver Gallery and which I picked as this year’s best gallery show in the Best of Tacoma issue of the Weekly Volcano.

Also showing at Gallery Madera through September is the ceramic art of Anne Reilly featuring sculptural and functional stoneware.