My take on Maddock 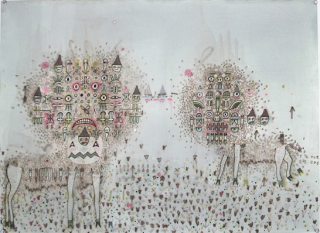 You’ve probably already heard of Jeremiah Maddock. You may have seen some of his work already. You most likely read Daniel Blue’s article about his latest show at Mineral (Mineral is good for you, Weekly Volcano, Aug. 28).

Now I offer my take on it. It’s pretty good. I might even say it’s very good.

I did not inquire as to media, but the works appear to be mostly ink and watercolor on paper or on what appears to be vellum. A press release said he uses aged book covers as a template for his drawings. Whether they’re called paintings or drawings probably doesn’t matter, but to me they are drawings because the linear quality predominates with color being little more than decorative tinting.

The drawings look old, like pages from a medieval manuscript from Egypt or the Ottoman Empire or like hieroglyphics. But upon closer examination, the imagery becomes thoroughly modern and personal as Maddock draws highly personal symbolism in intricately repetitive patterns. The repetition creates harmony and unity, but the fascination is in the details. Things that look like one thing become, upon close examination, something entirely other.

Typical of the kind of density of repetitive patterning and the largest work in the show is This Place is Getting the Best of Me and is Still Receiving, a densely packed drawing of multistory buildings in brown and gray with a few peach colored lines. From a distance of seven feet or so, it looks like a modern city skyline but with one of the tall buildings curving over the others like a bent tree limb.

On closer inspection, we see that this building is a snakelike creature hovering over the city, and we notice strange details such as shapes that look like doors and windows that are actually tiny robots and spacemen, and the spire atop one of the buildings is a rocket ship taking off.

Jacko Head Trophy Doll Chimes pictures three figures. In the center is a female figure standing erect. She looks like a totem pole. Flanking her are men whose bodies vanish. We see only heads, arms and hands.

A similar picture is Poor Henry, a line of standing men being engulfed by what looks like a swarm of bees. Each “bee” is actually a letter of the alphabet. Of the men, we see only three full figures. The others vanish into ghostlike bits of bodies with only heads and feet and nipples showing.

One of the most intricate and complex pictures is He Hem Th Hen Te Hey Hay! (You have to love his titles — and no, there or no typos.) This drawing has a military theme. In the center is an airplane that also happens to look very much like a totem pole. Standing guard in the four corners are soldiers. There are also tanks and oil derricks, machines that look like a combination helicopter and construction crane, and a hooded figure that looks like one of Philip Guston’s Klansmen.

The drawings are tightly controlled and precise except for one work that stands out as totally different, being gestural with lots of open space and none of the density of the other works. It is titled Zoanthropy 3 and pictures three deerlike animals, one with a man’s head, one with a woman’s breasts, and one that looks something like a shrimp.

The show is called Bombfroilcatnek, which seems to be “bomb for oil” combined with “catnek,” whatever that may be. It is surrealistic, comical, and packed with meaning that is only hinted at but up to the viewer to interpret.