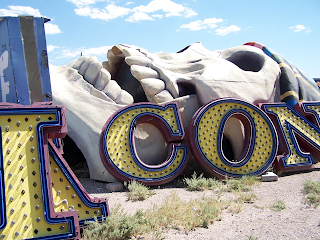 Rob Fiser’s AmeriKa: The Fourth Reich is the centerpiece of a large and varied group show called Circle of Friends at Grand Impromptu Gallery. AmeriKa consists of life-size game pieces in the form of clothespin portraits of members of the Bush regime.

“This is the first game sanctioned by the Ministry of Propaganda and designed to teach you and your entire family the time tested techniques used to gain profit and control over the masses,” Fiser writes in explanatory notes accompanying his “game.”

Each piece is a separate figure which can be moved around, stood up, laid down, grouped and re-grouped. At Grand Impromptu they stand and lie in a large circle in the center of the gallery. The portrait faces are realistically rendered and easily recognized, even though figures such as Donald Rumsfeld and John Ashcroft are quickly receding from public memory (the mind tends to block out unbearable memories).

As if further identification were necessary, each figure wears a name tag, but the name tags are all nicknames: Shrub, Rummy, Condi, and so forth. And they all wear clothes that associate them with their connections to the military-industrial complex, Big Oil in particular. “Shrub,” for those who may have forgotten, is what Molly Ivins called President G.W. Bush. The Shrub game piece has a Hitler-style mustache.

AmeriKa: The Fourth Reich is funny, inventive and well crafted.

The rest of the show is uneven in quality. There’s nothing bad, but there are a number of works that are not particularly remarkable. There are also some excellent pieces on display, most notably John McCuistion’s ceramic figures, Mary Holste’s photographs, and some new works by Janet Marcavage that take some of the imagery she showed last year at AOC Gallery in a slightly new direction.

McCuiston, who is also currently featured in a 40-year retrospective exhibition at Kittredge Gallery, University of Puget Sound, is a ceramic sculptor of skill and vision. Here he shows a group of three female figures that are fun, funky and somewhat ominous.

It is hard to describe Marcavage’s work. She’s showing three paper cut silkscreens with perforations and stitching. They are simple, emblematic figures such as might be seen in a child’s room, and they have an early Americana feel. I think there’s much more to these than meets the eye.

Holste’s photographs are colorful and dramatic, and they also depict Americana, but a different Americana. Whereas Marcavage’s Americana is of home and hearth, Holste’s is of the ‘50s-style commercialism that dotted America’s highways before the interstate system homogenized the country. Giant high heel shoes and skeleton heads and teapots combined with huge signs and random letters — the ghosts and skeletons of old tourist attractions. I love them.

Overall, I think the friends’ work outshines that of the members. Therefore, it would be really nice if some of these friends joined the gallery.

One other invited friend not highlighted above but whose work stands out is Greenwood, who is showing handmade artist’s books made of cut-up and re-arranged postcards in tin boxes and Lucite frames. The one other member artist whose work stands out in this show is Bea Geller, who is showing a group of photographs from this summer’s Tall Ships extravaganza. All but one of her photos are close-ups of reflections in water.