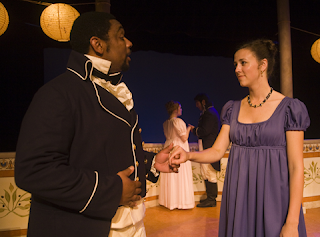 Tacoma Little Theatre opens its 90th season with the Shakespeare comedy “Much Ado About Nothing.”

It’s not as well known or as popular as some of Shakespeare’s other comedies, and it’s not as outrageously funny. In fact, large portions of Act II are intensely dramatic. Characters we have grown to know and love in Act I are soundly abused by lies and scandals, but all the bad stuff is eventually exposed as both false and meaningless, and there is a happy ending. The lovers come together in joy and the bad guy gets what’s coming to him.

What should also make the audience happy is that this is one of the easier to understand of Shakespeare’s plays. With his dense language, love of mistaken identities and complex plot structures, Shakespeare’s plays are often hard to follow, and simply keeping track of who’s who in many of his plays is a daunting task. But this one is easy.

Claudio falls in love with Hero at first glance, and Pedro intercedes on his behalf to arrange a marriage between them. So far, so good. The arrangements go exactly as planned; the lovers are to be wed, and everyone is happy. But not for long.

Back to Claudio and Hero in a moment. But first for the other lovers in this story: Beatrice and Benedict. They are both intelligent, witty, independent and cynical. They do not trust in love and marriage but manage to fall in love with each other despite it all and with the help of deviously plotting friends who whisper secrets meant to be overheard – planting in each of these reluctant lovers’ minds the thought that the other is in love with them.

By far the funniest scenes in the play are first when Benedict sneaks around and hides behind garden trees to eavesdrop on Pedro and Claudio, who are talking about him (with full knowledge that he is eavesdropping but pretending they don’t know he’s there) and then an almost identical scene with Beatrice eavesdropping when her cousin and her handmaiden are talking about her. Their attempts to hide are absurdly funny, and both Bender and Marley display an amazingly funny range of visual expressions and physicality that verged on mime.

All of this hilarity and comic intrigue turns sour when Don Pedro’s bastard brother, Don John (James T. Patrick) plots with his lackeys, Borachio (Joseph Fries) and Conrade (John C. Finch) to make it appear to Claudio that his beloved Hero has had affairs with other men, and thus is no virgin. Their method is to dupe Hero’s gentlewoman, Margaret (Maren Ham) to pretend to be Hero and set it up so that Claudio sees her in her window and overhears her talking to her illicit lover. Margaret is innocent in all this. She doesn’t know she is being set up.

The major actors are terrific, especially Bender and Marley. Griswold is absolutely believable and natural as Leonato, as is Ham as the very likeable Margaret. Lechelt and Peterson do not particularly stand out, due to the nature of their characters, but certainly do a good job as Hero and Don Pedro. Other characters not yet mentioned who are great fun to watch are Blake R. York as the comical constable Dogberry and his bumbling deputy, Verges (Kerry Bringman) and Michael Dresdner, who is lovable as Leonato’s brother, Antonio. Not so terrific, unfortunately, are Patrick as Don John, who dropped a few lines on the night I saw the play, and Fries, who overacted and seems to be posing too much as Borachio.

The set is simple but effective, and if you are put off by the fake-looking trees, which do not seem to fit stylistically with the rest of the set, be patient; you will discover there’s a good reason for that.