It’s not serious theater, but it sure is a lot of fun 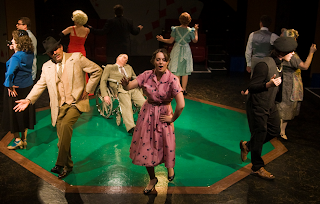 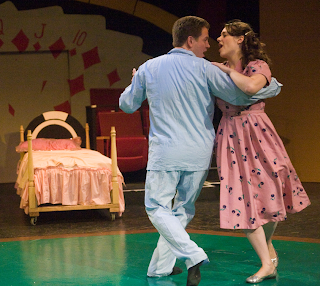 Lakewood Playhouse opens its season with “Lucky Stiff,” a bizarre little comedy billed as a musical murder mystery. This was the first play written by Lynn Ahrens and Stephen Flaherty, the team that brought us “Seussical,” “Ragtime” and “Once Upon this Island.”

This comic romp does not represent the team’s finest hour, but it certainly has its moments. On the other hand, if you’re in the mood for offbeat humor, director Micheal O’Hara and his crew offer a concoction of insanity that is sure to delight.

One of the strangest things about this play is that, despite all the singing, it doesn’t seem like a musical at all. Lines that were sung could have been spoken and nothing would have been lost. The best things are the nonmusical parts, in particular O’Hara’s direction, the complex movement throughout (which must be credited to both O’Hara and choreographer Heather Malroy) and the over-the-top acting by the supporting cast.

Note that I specified the supporting cast. That’s because there is a marked difference between them and the leading man (Vince Wingerter as Harry Witherspoon) and his leading lady (Leischen Moore as Annabel Glick).

Wingerter and Moore play their characters as the boy and girl next door. Their acting is underplayed, their characters have no real conspicuous quirks, and their singing is pleasant but not outstanding.

The staging of all these characters entering and exiting in various costumes designed by Frances Rankos is amazing. A playful set (by O’Hara) and lighting effects by Scott C. Brown go a long way toward making all these little cameos work.

The most outstanding lighting effect, however, is defeated by a too-visible audience. It’s a dream sequence under black lights. Cast members wearing white hats and gloves dance around a sleeping Wingerter, their bodies invisible and their hats and gloves glowing under the black lights.

It’s a wonderfully creative touch and probably would have worked well on a traditional stage, but when done in the round, all the light-colored clothing in the audience glows in the dark too, which becomes terribly distracting.

So far I haven’t even mentioned the plot. It’s a silly plot. Harry Witherspoon is stuck in a dead-end job as a shoe salesman. His uncle is murdered, and Harry is supposed to inherit $6 million. But there’s a catch. In order to get his inheritance he must take his dead uncle, who has been stuffed by a taxidermist, on a weeklong vacation to Monte Carlo and do all the things the uncle wanted to do there, from gambling to sky diving to scuba diving. If he fails to do any of the stipulated things, the money goes to a home for stray dogs. Hot on the trail of Harry and Uncle Tony are Annabelle Glick from the dog shelter and Rita and Vinnie, who think Harry and Uncle Tony has a box full of stolen diamonds.

The supporting actors do a great job of parodying stereotypes. With her low-cut red dress and hula-dancer hips, Malroy does a hilarious takeoff on a stereotypical sexpot. Serface uses his great talent for voices to play many roles, most notably a sleazy nightclub emcee. Richmond staggers stupidly as the drunken maid. Bringman does a good job of bell hopping, and Sharry O’Hara is equally charming as a British landlady, a Southern belle and a French maid.

This is not great theater. At best, it was kind of practice for Ahrens and Flaherty, who later developed into great writers. But it’s a lot of fun, and O’Hara and company do it well.