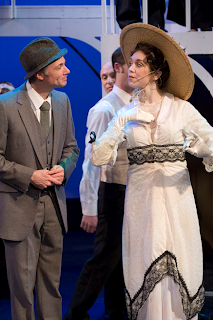 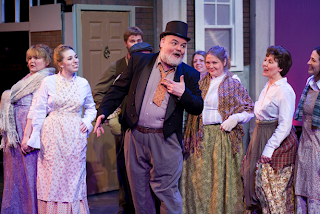 Pictured, top: Sean Mitchell as Henry Higgins and Natalie Moe as Eliza Doolittle; bottom: Eric Hartley as Alfred with ensemble cast. Photos by Michele Smith Lewis.
If “My Fair Lady” is not the most popular musical of all time, it might be among the top five. It has been charming audiences since 1956. The Centerstage production at the Knutzen Family Theatre in Federal Way is definitely worth the drive and the price of admission.

The Lerner and Lowe musical is based on George Bernard Shaw’s play “Pygmalion,” which was based on the Greek legend of a sculptor who falls in love with his sculpture of a maiden.

The Centerstage version is shortened from the original, but still runs a whopping three hours.

Set in London in the early 20th century, “My Fair Lady” is the story of a professor of phonetics, Henry Higgins (Sean Mitchell), who bets his friend Col. Pickering (Andy Tribolini) that he can teach a guttersnipe flower girl named Eliza Doolittle (Natalie Moe) to speak and act in such a way as to be accepted in upper-class English society.

It is a big production and costly for a theater of this size, but I wish it could have been even bigger because this is the kind of play that calls for a full Broadway-type staging, if for no other reason than to make the many set changes less distracting.

The cast, the choreography and the music were all superb, but there were things about the production values that disturbed me – nitpicky perhaps, but bothersome nevertheless. The revolving set designed by Craig Wollam changes from a believable upper-class home to a gritty street scene. The design is excellent, but I wish the carpentry had been more finely finished. And it would have been nice if they could have had flying sets or motorized revolves and more dramatic lighting to minimize the distraction of the set being pushed by hand and actors and stage hands carrying furniture about.

I also felt the musical overture and entr’acte could have been shortened or even omitted as a concession to modern audiences, which are not used to sitting through three-hour productions. Similarly, I wish the scenes at the racetrack and at the Transylvanian Embassy could have been shortened. All those dreary upper-class snobs are quite tiring, although the part of the racetrack scene with Col. Pickering and Professor Higgins’ mother (Rosalie Hilburn) is precious, as is the part where Eliza bursts out with a cockney curse.

The principle actors are all marvelous. Moe truly looks the part of Eliza. She handles the cockney accent well and transforms gradually and convincingly into a swell lady – with occasional slip-ups into her past speech patterns that are hilarious. And her voice is beautiful. I especially loved her rendition of “I Could Have Danced All Night.”

Eric Hartley makes a lovable Alfred Doolittle, Eliza’s hard-drinking father. His growling renditions of “With a Little Bit of Luck” and “Get Me to the Church On Time” with the full chorus of street urchins are the most rousing song-and-dance numbers in the play. The choreography on these numbers is also outstanding, especially the slow- and stop-motion action. Hartley sneaks in little comic bits that are almost unnoticeable but which help define his character, such as the way he scratches his belly and butt while talking to Higgins.

Which brings us to the main attraction, Mitchell as Henry Higgins. Mitchell enlivens this wonderfully complex character with snide looks and controlled fury when angered. I can’t imagine anyone being more perfect for the part.

Finally, there are two actors in supporting roles that deserve special notice: Loretta Deranleau Howard as Higgins’ servant, Mrs. Pearce, and Ben Cournoyer in the ensemble cast. Cournoyer is not even a named character, but his performance is mesmerizing. Both he and Howard have amazingly expressive faces.

It’s been almost a week since I saw it, and I’m still humming those marvelous show tunes.

I was glad to see you mentioned Ben Cournoyer. I try to mention unnamed people in the chorus if they really hit me, too. I figure in community theatre it's one of the rare perks you can get.