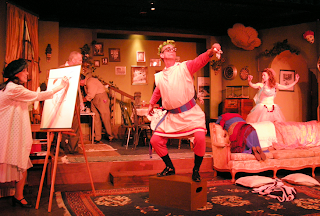 You Can’t Take it with You,” the classic comedy by George S. Kaufman and Moss Hart, is being performed by Paradise Theatre in Gig Harbor. It is a joyful play that evokes an endless stream of belly laughs as a huge cast of eccentric characters interact in a madcap manner with so many plots and subplots and sight gags that it would be hard to keep up were it not for director Jeff Richards’ skillful timing and blocking.

During much of the play, the stage is filled with Sycamore family members and their many guests, and nearly always there are two or three side actions taking place at once – little comedic bits or humanizing touches taking place away from the main action, such as Grandpa (Ian Lamberton) throwing darts and almost hitting his granddaughter Alice (Bethany Hodges) or Essie and Ed (Ivy Steinberg and Mike Schiller) whispering and giggling behind everyone’s back – even during the blessing at dinner – or the maid, Rheba (Valerie Jolibois) scratching and wiping her nose during that same blessing. Little touches such as these bring the action down to earth and make the wildly eccentric characters more believable.

And wildly eccentric they are indeed. Grandpa’s all-consuming habits are going to graduation ceremonies and tending his pet snake, and he has never paid income tax. Lamberton’s portrayal of Grandpa seems a little stilted at first, as if he is reciting his lines by rote instead of conversing, and I wish he played the part in a more comedic manner. Still, as the play progresses he becomes more likable.

His daughter Penny (Diane Daniels) is a loopy dame with an abiding love for her family and aspirations to become a playwright. She has been writing plays almost nonstop since a typewriter was mistakenly delivered to her home. Daniels is wonderful in this role, with her nervous gestures, big eyes and a toothy smile.

Penny’s husband, Paul (Jim Curry) is one of the least interesting characters, and he is played rather woodenly by Curry.

The two daughters, Alice and Essie, are terrific characters and both Steinberg, as Essie, and Hodges, as Alice, do a fine job of acting. The physical resemblance is close enough for them to be believable as Penny’s daughters. They even have the same kind of jerky movements and big-eyed beauty as Daniels.

Steinberg is the more entertaining of the two with her bad dancing and over-the-top enthusiasm for just about everything. Hodges meets the challenge of portraying the only sane person in a wacky family. She seems to be the most sincere and unaffected actor on stage, which is exactly what the character calls for. And I love her hairdo and costumes, especially the lovely blue gown and the black hat with white feathers. (I don’t know who to credit for those as a team of volunteers is listed in the program as donating costumes and props.)

The cast is a mixture of beginning actors and those with a lifetime of experience and training, and although some are noticeably amateurish, most do a really good job. One who particularly stands out is Darla “Kate” Smedley as Mrs. Kirby. Smedley has never before acted on stage, but she is delightful as the somewhat snooty and ill-at-ease housewife.

Also outstanding for their broad comic antics are the director, Richards, as the Russian ballet coach Boris Kolenkhov, and Mick Flaaen as Paul’s assistant, Mr. De Pinna, who emerges periodically from the basement where he seems to spend all his time making fireworks. Both Richards and Flaaen have extensive acting experience, and it shows in Kolenkhov’s growling voice and big gestures and in Flaaen’s exaggerated Italian accent and his weird way of walking. Absurd comic prop glasses and hat add to Mr. De Pinna’s comic appeal.

Kaufman and Hart’s writing is excellent, which is a large part of the reason this play won a Pulitzer Prize and the movie version won an Academy Award for best picture. It is inventive and outrageous and still relevant some 72 years after it premiered on stage. Woven into all the crazy antics of this band of misfits is a simple tale of romantic love and love of family.

This is a fun performance that is enjoyable for people of all ages.