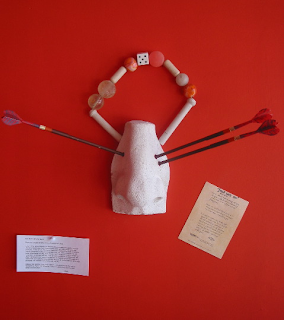 Lynn Di Nino’s latest poke in the eye of art

Lynn Di Nino is a funny lady. But you knew that already, didn’t you? She’s clever, and she’s a skilled craftsperson. But that begs the question: does that necessarily make for great art? Cleverness alone often makes for gimmicky, pseudo art.

For starters, an artist must have something to say and say it well or in an interesting way. Di Nino does that. Then there’s a thing called “significant form.” The critic Clive Bell coined that phrase and maintained that significant form was the one thing common to all good art. It took him a whole book to explain what he meant, but essentially it came down to aesthetically moving combinations of lines, shapes and colors. Like charisma or the chemistry between actors on a screen, it’s something that is easy to recognize when you see it, but hard to explain. I think Di Nino has it. At least in some of her works.

Her latest show at Mineral is a departure from her usual. Known for concrete sculptures of very weird and comical animals, in this exhibition she tackles the theme of martyrdom with a series of jewelry that would be impossible to wear — great big hurkin concrete jewelry that hangs like a millstone around the wearer’s neck. One of the pieces actually is a millstone, which is Di Nino’s way of acknowledging the source of her metaphor, the Bible: “It would be better for him if a millstone were hung around his neck and he were thrown into the sea, than that he would cause one of these little ones to stumble.”

Each piece in the show is a metaphorical millstone of sorts, usually with a humorous twist and referring to some form of martyrdom, religious or domestic, and each piece comes with a written explanation. And the explanations are as clever as the art.

Stiff Upper Lip consists of a concrete dumbbell (35 pounds) and a brick and a stone on a heavy chain. It may be hard to carry, but keep a stiff upper lip and don’t let anyone see your pain.

Burn Baby Burn is a heavy ashtray with snubbed-out cigarettes and a hole right over, if worn around the neck, where the heart would be. The wall text says the hole is for burning a hole in your heart.

Fowl Play is one of my favorites. It’s a concrete albatross. The wings look like two twirling dancer’s skirts or a bra with black and white fringe — not, I’m sure, the intended interpretation.
Soft Touch is another favorite. It is an off-square field of tiles that duplicate the courtyard floor at Tacoma Art Museum and simultaneously looks like a woman’s purse with a pearl handle and an eight ball. Martyrs are always behind the eight ball.

Some of these skirt the edge of being just clever and nothing else, which is something the artist is very much aware of as indicated in one of the printed wall statements that says “I am a slut for a clever idea.”

“These cast concrete necklaces are intended for martyrs to wear,” says Di Nino. “I’ve created them to be as heavy and cumbersome as possible, with a range to fit any self-punishing person’s specialized needs.”