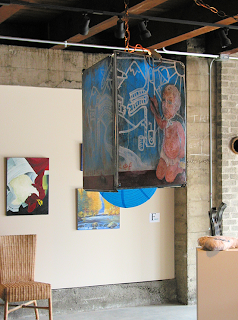 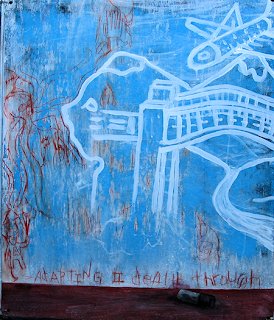 All honor and glory to Gallery Madera and the Tacoma Artworks Group for showing a deserving bunch of college art students. But that is exactly what Tacoma Artworks Group, or TAG, is all about. TAG is a sanctioned club through the Associated Students of Tacoma Community College. The mission of TAG is “to provide TCC students with real-world opportunities to showcase their artwork at venues in the Puget Sound region, and hold activities to enhance their exposure to the diverse mediums of the world of art.”

Of course, they can’t fulfill that mission without the cooperation of participating Puget Sound venues, so again — All honor and glory to Gallery Madera.

The artists featured in Gallery Madera’s latest show are all students and include: Jessica Atal, Jefferson Elliott, Joey Freer, John Gordon, Lizzie Gulick, Jessie Krett, Jimmy McDonough, and Mahta Shakib. That’s too many artists to write about in a single 650-word column, so I’ll just highlight the best and encourage you to go see the rest. The best are a couple of painters whose works have a lot in common — Joey Freer and Jefferson Elliott.

Both Elliott and Freer paint in a free-flowing, graffiti-inspired manner that calls to mind works by Jean-Michael Basquat and Cy Twombly coupled with a line quality in Elliott’s work that looks a lot like Willem de Kooning. Their paintings are gritty and energetic. They are drawings in paint. Color is almost incidental, mostly monotones with line drawings superimposed over washes of a single color. Their paintings are all about the line and the image.

Freer’s paintings are untitled. They are painted with oil paint on wood — specifically old found scraps of wood such as the fronts of old kitchen cabinets with the pull handles left in place. One painting is of flowers and surrealistic animal and human body parts drawn in sepia and white line on a dull green background. On the left-hand panel there is a creature that looks something like an upside-down baby bird. Above it is a large flower. In the center panel is a gradual slope of a hillside or what could perhaps be interpreted as the contour of a body. Above this is what looks like a pair of long, drooping female breasts. Or maybe they are cartoon eyes popping out of their sockets. Only one of the eyes has an eyeball, or if interpreted the other way, only one of the breasts has a nipple. The third panel has a pair of hands and a flower. The three panels are visually disjointed yet related. There is an upward diagonal thrust that serves as a unifying element counterbalanced with the two flowers that create an opposing diagonal.

Another Freer painting done on old cabinets repeats many of the same elements: the flowers, the body parts, the upside-down birdlike creature, and the dangling breasts (in this case sans nipple). Plus, it has the additional element of a train engine that is drawn more realistically and in much more detail than any of the other images. Normally such a tightly controlled drawing amidst so much sketchy drawing would seem out of place, but this train engine has just enough of a sketchy quality to fit in.

Elliott’s Adaptation is a mixed-media painting that is seen hanging from the ceiling in a triangular configuration with line drawings in dark red and a runny white on a blue background and odd little objects and figures painted in a totally different manner that look like 3-D objects standing in front of the painting and interacting with it. Including a baby (or doll) in diapers that appears to be painting the painting and a squirt bottle with a trompe l’oeil cast shadow. The baby does not fit well within the style of the painting, but the bottle does. I think if the three panels were hung side-by-side at eye level it would be a better work.

This is a show that is well worth seeing, featuring artists who might become the next big names in the area.