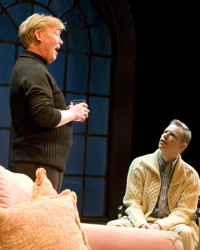 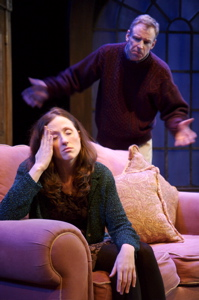 Conor McPherson’s “Shining City” is the latest poetic, Beckett-like modern drama from the playwright to be produced by Harlequin Productions. Harlequin has also brought us McPherson’s “The Weir” and “St. Nicholas.”

The play takes place over an unspecified span of time in the Dublin flat of Ian (Vincent Brady), a former priest who is now a therapist. It consists largely of long and poetically halting monologues by Ian’s first and perhaps only patient, John (Anders Bolang).

Ian has, in recent years, undergone a crisis of faith, left the priesthood, fallen in love with Neasa (Jane May) and fathered her child and is now going through a painful breakup. He says he can’t be with her anymore, but he doesn’t seem to know or won’t tell her why.

John comes to Ian for bereavement counseling. His wife was recently killed in a horrible accident, and he feels that he is to blame. He has seen her ghost in their house and has moved into a bed and breakfast to escape the haunting.

In his counseling sessions, John tells his story to Ian, which includes the reasons why he feels so guilty.

Along the way, Ian has an intense argument with Neasa and a homosexual encounter with a young man, Laurence (Brian Jansen). These two short scenes are interspersed with much longer scenes of John and Ian’s counseling sessions.

Ian also comes to terms with his demons and seems to have made up with Neasa and, at the end, is packing up to move in with her. But I had serious doubts as to whether or not he has truly resolved his conflicts.

The writing is outstanding. McPherson weaves the story line through dialogue without ever resorting to straight exposition. John’s long monologues – which would be boring in the hands of a less skilled writer and actor – are prose poems splattered with aching pauses and constant repetition of the phrase “ya know” and with John’s favorite curse word. Bolang convincingly captures the halting and painful manner of a man struggling to express his deeply felt and painful emotions. Bolang, who looks a lot like Albert Finney, has a believable Irish accent.

As the therapist and as the failed lover, Brady comes across as bumbling and hesitant. The audience can see him struggling to contain his emotions, and when he finally does express himself in his fight with Neasa, both Brady and May are explosive. When he insists on breaking up with her, she is shattered. Her expression of pain is so huge that it is hard to watch.

Jansen’s role is the smallest. He’s on stage for only one short scene and doesn’t have a lot to say, but his physical gestures and facial expressions are wonderful. People who saw Jansen in “Picasso at the Agile Lapin” and “Take Me Out” know that he is a natural-born character actor. Outrageously comical in previous roles, in this play he is like a sweeter and softer version of a young Marlon Brando.

One of the biggest problems in any play is how to handle transitions between scenes. Stagehands coming out and moving props is highly distracting. Even dropping a curtain takes the audience away from the magic of the play. In this play, all transitions are handled beautifully with a variety of light changes and onstage actions by the actors. This is helped by the use of freestanding doors that allow actors to walk in and out of rooms while remaining visible to the audience, which metaphorically relates to the peek into the hearts and minds of the characters in the therapy sessions. These smooth transitions are the result of a brilliant bit of staging by scenic designer Nate Kirkwood, lighting designer Jill Carter and director Scot Whitney.

“Shining City” is modern drama at its best.