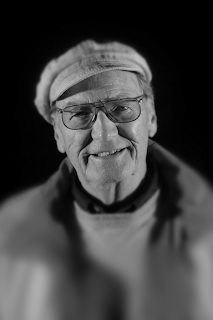 Close Encounters and be found at Grand Impromptu Gallery

Photographer and curator Chip Van Gilder has come up with a clever concept for a group show at Grand Impromptu Gallery, the artist-owned co-op two doors down from the Grand Cinema. And it’s about time.

So far, every show at this gallery has been a hodgepodge of art by the member artists. It’s not that they’re bad artists, but how many times can a gallery recycle the same artists before it gets boring?

Van Gilder’s photographs differ from Close’s daguerreotypes only in scale (Close uses gigantic scale, and Van Gilder doesn’t) and in technical differences (Close uses the camera for sharp focus in the center with fuzzy edges; Van Gilder gets the same effect through digital manipulation).

Against a back panel in the gallery is a group of small black and white portraits of the other gallery member artists. On one section of the adjacent side wall are larger portraits of artists Bill Colby, Daniel Blue, Lynn Di Nino and a self-portrait of Van Gilder. All range from the deepest of blacks to subtle gray tones with extra sharp focus fading to amorphous edges. They are beautifully rendered portraits, and they perfectly capture the Chuck Close look — a clever idea skillfully executed.

The other gallery artists are showing, with lesser success, works that fit in with the theme — not so much the specific homage to Chuck Close, but the more generalized theme of the close-up (the show is called Close Encounters). Trinda Love is showing close-up “portraits” of radishes painted with heavy impasto. Becky Frehse shows portraits of children drawn with mixed media on paper, each accompanied by a prose description by Judith VanPraag, a Dutch writer based in Seattle. Susan Paredes is showing close-up photographs of Tacoma scenes. Everybody’s getting up close and personal, but it’s a stretch to see how they all fit into the theme. With the exception of Van Gilder’s photographs, it’s still a hodgepodge of works by the various member artists — the best of whom (other than Van Gilder) are Bea Geller and Betty Ragan.

Ragan is new to the gallery. She is showing two large-scale photo collages from a series in which each work uses a woman to represent a continent. In this case it is an African woman and an Asian woman representing their respective home continents. The images are collaged into pictures of cherubs in Baroque picture frames and drawn into with a pencil. They are soft and delicate in mid-gray tones and are carefully executed. You have to look very closely to see that they are collages. As an aside, I was not familiar with Ragan’s work prior to this show, but a bit of online research has taught me that she’s been around awhile and is quite well known for her Buttoned Down Series, photo collages combining photographs of early 20th-century buildings with those of tailored women’s clothing.

Geller’s works include digital images of two of the member artists and two more generic images of an Actor and Youth. They are well composed with absolutely gorgeous color.
Also included are works by Dorothy McCuistion, Bill Colby and LeeAnn Seaburg Perry.