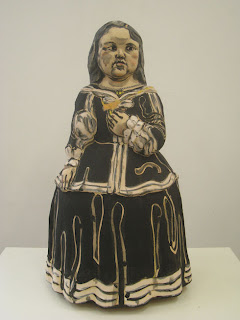 The Neddies are here again. The Neddy Fellowships are among the most prestigious art awards in the state and are granted each year to two worthy Washington state artists in honor of longtime Seattle painter Robert “Ned” Behnke, who died in 1989. Every year for the past four years Tacoma Art Museum has shown works by the winners and nominees (this year two winners and eight nominees). Ostensibly the winners are among the very best artists in the state. I don’t always agree with the jurors’ choices. In fact, I don’t think I have ever agreed with the top choices. This year is an exception. I think Randy Hays, fellowship recipient in painting, and Akio Takamori, winner in ceramics, are both fully deserving of the awards.

I am less excited, however, about some of the other nominees.

Takamori’s ceramic figures combine modern sensibilities with ancient forms in a marriage of Western and Asian art traditions. His figures draw on memories of his childhood in Japan, on traditional Japanese sumi techniques, and on his knowledge of Renaissance art from Italy and Spain. His Female Dwarf and Princess are reinterpretations of figures from the 17th-century Spanish painter Diego Velásquez in stoneware. Female Dwarf is based on Velasquez’s Las Meninas (Maids of Honor). She is an almost life-size ceramic sculpture glazed in dull tones of black, white and gray, and she has a flat face not unlike that of the dwarf in the Velásquez painting. Princess is a figure that combines Japanese features with Renaissance fashion, most notably the big ruffled collar. What I most admire in Takamori’s figures is the way his glazes look like ink painting on stone, especially the way creases in the face such as around the nostrils and under the chin are painted in and the drippy-rosy cheeks.

TAM visitors will remember Takamori for his wonderful one-person show Between Clouds of Memory in 2006.

TAM visitors also will remember Hays’ The Ferry to Eagle Lake from the Building Traditions show. To oversimplify his method, Hays prints photographs on canvas and paints other images over them with loosely brushed washes of transparent paint. His large diptych Ruins, Aphrodisius, Turkey and Pass Christian, Mississippi, 2008 is a two-panel painting of ancient ruins painted over a field of similar and related photographs from Aphrodisius, Turkey, and Pass Christian, Mississippi, one of the coastal towns that was destroyed by Hurricane Katrina. His watery transparencies give his pictures a ghostly quality, and the similarities and contrasts of his images are fascinating. They prod memories and evoke thoughts, and his painting style and color choices are lovely. In this one, the photos are a dull blue-gray and the overpainted images a brilliant, fiery orange with areas of light violet — sunset colors and images seen as if through water.

The most startling, disturbing and mesmerizing work in the show is Doug Jeck’s stoneware sculpture Cain and Abel. Jeck modernizes and humanizes heroic figures from Rome and Greece. And when I say he humanizes them, I mean that figures based on idealized classical statues are flawed in very human ways. He often breaks apart and recombines parts of figures in disturbing ways such as in Cain and Abel (a single figure, not two figures as the title implies) whose hands and forearms are too small for his body. This figure is disturbingly all too naked in body and spirit, a powerfully muscular man who seems to be cringing in fear.

These are the best works in the show. The rest are worth looking at but probably not worthy of being singled out as among the very best of Washington state artists.