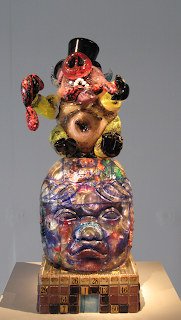 The de la Torres brothers’ motto must be anything worth doing is worth over-doing. They exploit the transparency and glimmer of blown and cast glass the way a bad comic exploits a cheap laugh. Similarly, their art celebrates and parodies Mexican and Mexican-American culture.

Mexicans who immigrated to Southern California as young boys, Einar and Jamex de la Torre borrow from traditional Mexican and Aztec myths and wrap them in American commercialism. They are the bastard twin sons of Andy Warhol and Frida Kahlo.

The brothers’ show at Traver Gallery, Tacoma, is called Vitrolic Compliments. It consists of relief wall sculpture and freestanding glass sculptures that are wildly eccentric with overly bright colors and loaded with imagery that is often funny and filled with social, political and sexual references. Three years ago they had a show at the Museum of Glass with a complimentary small exhibition at Traver. The works they showed then were loaded with sexual imagery. There is little of that in the current show other than two small wall sculptures called Anime and Bethlehem Porn Star that are remindful of Georgia O’Keefe’s flowering vagina paintings. In each of these, the central image is a flaming or flowering vagina that is simultaneously an alter.

This show seems to be more concerned with the culture of advertising and rampant commercialization. Images that show up repeatedly are soft drink bottles and beer bottles, hearts and other bodily organs, swords and other weapons, religious symbols of all kinds, and pig heads. I’m not quite sure what some of the images are supposed to represent. Further explanation by way of wall texts might be helpful, but 1) art should be able to stand on its own without explanation and 2) since I saw a preview before the show opened I don’t know whether or not further explanation is provided. Anyway, from my limited fund of knowledge, I presume the pigs symbolize greedy corporate executives.

Visually, many of the pieces are crude looking (intentionally) and overly gaudy. Some of the pieces are downright ugly. Like Killing the Inner Child, blown glass and mixed media, which is pictured on their invitation cards. It is a crude statue of some kind of primitive god — probably Aztec — standing on top of a cake with a spear struck through his ear and holding a little pink child’s hand mirror. This creature is disgustingly ugly.

Among the most attractive works are a group of six wall pieces that were untitled when I saw them. Each has flat cut-out metal shapes, a couple of which are in the shape of birds and all of which have brand names painted on them: Tide, TDK, Coke, etc. Clear transparent faces and figures cover each of them. These pieces are bright and quite beautiful. Similar transparent faces and figures show up on many of the works and are among the most beautiful of the brothers’ visual tropes. They look like melted globs of glass that are barely visible.

Other favorite pieces are Mexican Buddha and Organ Exchange. Mexican Buddha is a freestanding sculpture of a fat seated Buddha-like figure with a big pig head sitting on top. What appears to be crushed beer and soda cans are embedded in the body. Like the transparent faces mentioned above, these crushed cans (if that’s what they are) are hard to see, and it is the hard-to-see imagery in many of the works that most successfully and beautifully exploit the transparency of glass. Organ Exchange is a large, wall-hanging mandala with jeweled and mirrored diamonds circling the outer rim, a god’s head in the middle with a crown of clear glass figurines that look like praying priests, four brown faces that look like nurses with Red Cross hats, and a circle of starbursts stuffed with dollar bills.