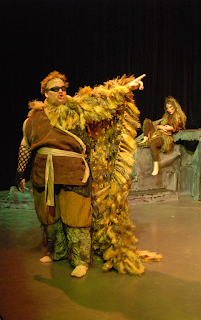 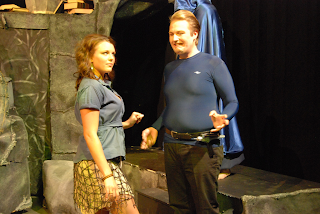 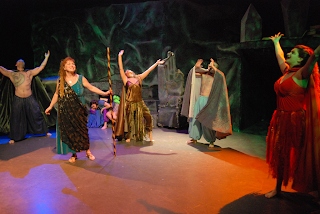 Tonight and tomorrow's matinee are your last chances to see this entertaining play.

Shakespeare’s plays have been updated in countless ways, apparently in an attempt to keep them fresh – as if that were needed. They’ve been set in modern times and future times, turned into rock ’n’ roll musicals and done with women in men’s roles.

Theater Artists Olympia’s latest Shakespearean performance is no exception. In its version of “The Tempest” (adapted and directed by Michael Christopher) the ship that wrecks on Prospero’s island is a spaceship a la “Star Trek” and Prospero is a woman (Pug Bujeaud). Originally the only woman in the play was Prospero’s daughter, Miranda (Cecelia Nixon). But in this version Prospero’s brother, Antonio (Christina Collins) is “her” sister, and the jester Trinculo (Raychel A. Wagner) is also a woman.

Adaptations of a more experimental nature are typical of this theater company whose mission, as defined in the play program, is “producing materials that are thematically more provocative and interpretations of classics more experimental” than what is generally found in the area.

I applaud their work on this production for many reasons, not the least of which is the excellent set designed by Christopher and the artistic set changes, which must be credited to Christopher and stage manager/choreographer Jenny Greenlee. Set pieces are not simply moved about; they are danced about by two belly-dancing nymphs with green skin and harem dresses (Karma Shannon and Laura Eaton) and two hooded and unidentified stagehands. Seldom have I seen set pieces moved about so gracefully and without expensive effects.

The story line is too complicated to outline here, but I would suggest people who are unfamiliar with it read it before seeing it or, at the very least, study an online synopsis. It helps to know the story beforehand.

In skimpiest outline, it is the story of the sorcerer Prospero and his (her) daughter Miranda, who were exiled to an island 12 years ago by Prospero’s brother, Antonio (sister in this adaptation). Prospero causes a storm to wreck Antonio’s ship on the island. Also on the ship are King Alonso (Patrick McCabe) and his son, Ferdinand (Josh Anderson), who falls in love with Miranda; the king’s drunken butler, Stephano (played marvelously by Dennis Rolly) and Trinculo the jester. Stephano and Trinculo plot against Prospero with a monster called Caliban (Christopher Cantrell).

These three, Stephano, Trinculo and Caliban, steal the show. The funniest scene in the whole play is when Trinculo crawls on top of Caliban, causing Stephano to think the pair are a single four-legged monster. This scene is funny beyond words and worth the cost of a ticket all by itself.

Another actor who warrants special notice is Anderson as the silly, lovestruck Ferdinand. Seldom has a lover been so undeserving of a beautiful woman’s love. Anderson interprets this bumbling lover as effete and overly excitable.

I think the “Star Trek” parody – especially the lurching on the bridge – is silly but fun, as is the insertion of a certain well known television theme song. My only other criticism – and it is major – is that Bujeaud is miscast as Prospero. She is a terrific actor, I’ve loved her in many another role, but I simply do not think she is right for this part. It calls for someone more magisterial or mysterious, perhaps an older man in the Patrick Stewart mold or a more statuesque woman with a booming voice.

TICKETS: $12 at the door or at Buyolympia.com/events