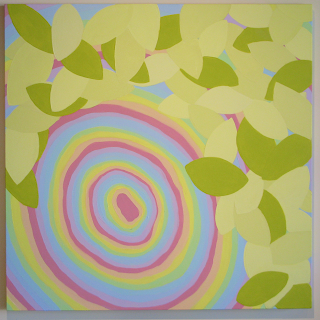 by Bilge Rat Robby and Alec Clayton published in the Weekly Volcano, July 3, 2008

Note: in celebration of Tall Ships Tacoma, all articles in this week's Volcano were written as if by pirates.

I was standing by the pool outside the Museum of Glass Thursday noon, enjoying the new sculptural installation, Mirrored Murrelets by Joseph Gregory Rossano, when a pair of pirates burst out of the pool like breaching whales and trussed me up with rope so old it was sprouting barnacles.

Arrr! Belay that crap. This show is called From the Garden, and it’s all frilly girlie stuff. Flowers and rainbows. Arrr! But at least there’s a snake or two in the garden.

Kin has an interesting way of combining two different types of painting. She paints concentric circles and rainbows in pastel pinks and yellows and blues and flowers and leafs in yellow and a sickly yellow-green, all of which are kind of sloppily painted in flat tones with no modulation or transparencies. And she paints delicately modulated patterns of overlapping floral shapes that in places look like stencils and involve a lot of transparent areas. I don’t like the stuff painted with flat colors. They are sloppily done, and not in a good way. But avast, me hearties, I really like her sketchy abstract patterns with all the overlapping. These are like an extension of her earlier paintings. Some of these are graphite, acrylic and watercolor on paper, and they are particularly delicate with a deft touch, especially in the drawn graphite contours.

In some of her larger, multi-panel paintings, Kin combines the two styles. Her three largest paintings each have three panels. On each end of these paintings there are canvases that are relatively flat against the wall painted with repetitive floral patterns and the overlapping stencil look, and in the center of each is a canvas that extends farther from the wall and is painted in the flat style. Two of these, untitled Garden Painting II and Scene from the Garden I, are fairly successful paintings; the third, Garden Painting V, is not.

Garden Painting V is minimalist in style. The center panel is a target, and the outer panels are fluffy blue clouds on a white sky. Any painting that is this sparse needs to have more fascinating shapes or color combinations. This one has neither. The outer panels of untitled Garden Painting II are excellent by themselves. They are densely patterned with an intriguing surface quality and a terrific reversal of positive and negative shapes (pink and white flowers that visually operate as open space). But the central target painting is not very good. The third of these paintings, Scene from the garden I (which judging from the title must actually be the first), is by far the best. This is a beautiful painting that combines the opposing styles successfully.

Also showing are ceramic sculptures by Gene Phillips. He’s showing a small selection of stoneware pots with embedded surface designs. A couple of his pieces look like they are based on human forms — two in particular very obviously so. They are Torso, a green vessel with a rounded shape based on a woman’s hips and very short legs, and Kimono, a vessel obviously shaped like what it’s named after. All of Phillips’ pots are put together with flat slabs of clay and are each about two inches thick and glazed in solid colors, mostly blue and green.
The best thing about these pots is their form. They remind me somewhat of Brancusi and somewhat of Al Held. The surface decoration is superfluous and detracts from the form.