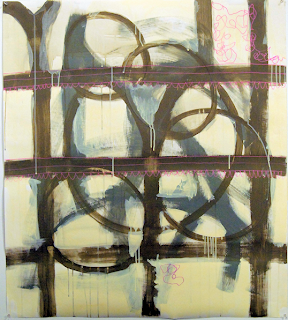 Published in the Weekly Volcano, July 17, 2008
Pictured: "For the Old Men," painting by Tracy Heron-Moore and "Not Eating," acrylic and charcoal by Marilyn Bedford. Photos courtesy The Gallery at Tacoma Community College.

All juried shows are alike: a few outstanding artworks, a whole bunch of so-so stuff, and a few really bad pieces. The sixth annual juried art exhibit at The Gallery at Tacoma Community College is no exception.

I’ll talk about the good stuff.

Ron Hinson’s untitled painted construction does not stand out in his larger body of work, but it certainly stands out here. Typical of Hinson, the piece balances disparate elements in ways that would never work at the hands of a lesser artist. Odd shapes are stuck together and painted with a delicate blend of intense and dull colors with — dangling by a thread at the bottom, something that has become a Hinson trademark — a glob of dried paint scraped off his palate.

Also outstanding are two abstract paintings by Tracy Heron-Moore. The best of these is For the Old Man, a classical design of gray bars in a grid pattern over a white background interwoven with a couple of delicate pink line drawings and held on the surface with transparencies and overlapping forms. This piece is understated and powerful.

Sandra M. Farmer has two painted stoneware figures in the show. One is brown in color and depicts what looks to be a naked African woman squatting down in a field of tiny ceramic pots. The other is a seated white woman with dark hair. Both are thin almost to the point of emaciation. The seated woman in particular is startling in her nakedness (think back two weeks to my review of Paul Uhl’s Naked Tacoma for the difference between nudity and nakedness).

Marsha Glazière’s Freeway Exit is an abstract painting with collage depicting rushing traffic on an exit ramp. There are few visual clues to the subject, which I probably wouldn’t have recognized without the title, but having been given that hint, the blur of speeding traffic was obvious. Glazière does a nice job of integrating all kinds of collage elements from cardboard and wood to computer circuit boards. The overall look is harsh. To many viewers it may be a discomforting painting, but I like it.

Bill Colby’s woodcut, Marker One, is atmospheric and iconic. Three large poles stand in a teepee-like tripod in a field with misty clouds at their tip and water or mist at their feet. This is a nice piece that evokes a feeling of both comfort and mystery.

Also outstanding is one of two acrylic paintings of dogs by Marilyn Bedford. Actually they’re both well executed, but one is fairly typical while the other, Not Eating, is unique in its use of blank space and its combination of paint and charcoal. The dog is painted in broad planes of loose strokes and stands far to the right. To the left is a vast expanse of white space with a food dish drawn in looping charcoal lines and above it the printed title done with the same kind of charcoal line and reverberating pentimenti.

There are also some nice ceramic pieces by Gail E. Kelly and Melissa Balch and one turned wood piece by R.R. Taylor. That’s about it for the good stuff. There’s very little in the show that’s really bad, but there’s a lot that is mediocre — meaning competently done but with nothing of any real interest either by way of content or form. So-so stuff we’ve all seen before. But then, as I said in my opening line, that’s what juried shows are always like.