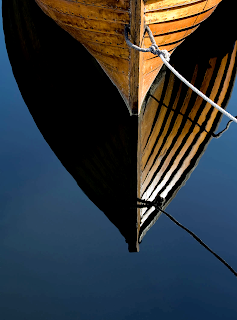 Around the world in Olympia


For a good selection of artworks that teeter between “real” art and home décor — i.e., that caters to a mass market without being too banal — go to Childhood’s End Gallery in Olympia. The latest show centers on a travel theme with paintings by Sandy Hurd, serigraphs by Sherry Buckner and photographs by Jim Nilsen.

Hurd’s paintings create a floating tableau against one wall of the gallery. At one end stands a young boy, a figure cut out of Masonite and painted in acrylics in a Pop Art style. Spread out across the rest of the wall as if flung through the air are paintings of trucks, cars, bicycles, tricycles, buildings, and houses — all in the same cut-out Pop style. The individual pieces are relatively realistic, but painted in flat, primary colors so that the entire wall takes on the appearance of a child’s room. The trucks, cars and airplanes look like toys. It is very playful and colorful. Viewed as a unified whole, I can easily envision it as a wonderfully decorated wall in a child’s room, but the individual pieces do not stand alone as art. I can imagine purchasing a group of these images, but not a single bike or train.

In a similar fashion, Buckner’s serigraphs might work well as something other than stand-alone works of art. They would make for delightful greeting cards or posters or maybe travel brochures or book covers. I can see one of these images as a cover for a fantasy story set in the desert, a child’s story (both Buckner and Hurd’s works in this show have a strong childlike look).

There are five pictures in the series. I’m not even 100 percent sure what these images represent; I did not read the titles or the artist’s statement. But they appear to be adobe-type huts in the desert or, in a couple, simply free-standing doorways to nothing. They are reduced to the simplest possible images with most details eliminated. There is a building, or part of a building, a horizon, and a deep blue sky. And snow — great big flakes of snow in the desert. Her designs are simple. Everything is centered. The colors are soft and vibrant. These are nice pictures, soothing and colorful. And maybe one of these days I’ll go back and read the artist’s statement to see if she explains why she’s pictured snow in the desert.

Finally, there are two groups of photographs by Jim Nilsen. These are simply amazing photographs. They look like paintings. The designs are strong; the colors are rich, and the textures look like brushstrokes or, in one instance, pastels. You have to study them very closely to see that the textures are on the objects photographed and not on the surface of the image.

On one wall Nilsen has a series of photographs of boats, a picture of a winding road in Tuscany, and a close-up of a hand-thrown, brown ceramic bowl against what appears to be a dirt wall. This one is all about textures, subtle color changes and strong shadows. The one of the road in Tuscany looks like a pastel, and the boat pictures look as if the “paint” were laid on with thick impasto strokes.

On a separate panel is a group of six very small photographs of buildings in different parts of the world — Italy, France and Mexico. Most of them focus on a brightly colored wall with a single door or window. The colors here are what simply knock you out. One in particular that stood out to me was a large expanse of acid yellow-green wall with one tiny window with a bright blue frame. Another pictures two adjacent walls, one bright yellow and the other intense blue. And yet another had a fiery orange wall. Nilsen did not create these colors and designs; he found them, selected them, and framed them in his viewfinder. If the art of painting is about creating beauty, the art of photography is about finding it, and Jim Nilsen obviously has one hell of an eye.