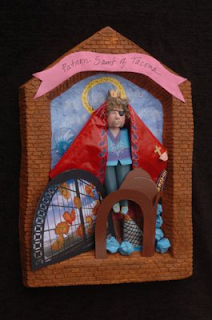 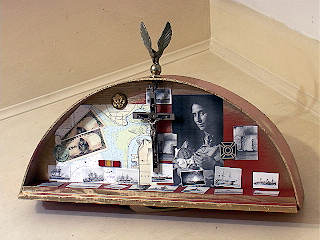 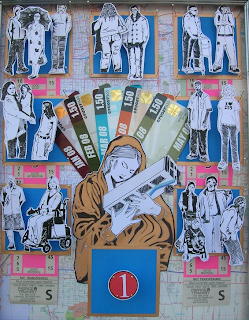 The show is called ICONcepts, but it could just as well be called the beatification of Dale Chihuly and Lynn Di Nino.

The term “icon” is one of those words the meaning of which has been so expanded through common usage and misusage that it can mean almost anything, from Hannah Montana to Jimi Hendrix to the Coca-Cola logo. Dictionary.com defines icon as “a representation of some sacred personage, as Christ or a saint or angel, painted usually on a wood surface and venerated itself as sacred.”

The curators of this show apparently gave the artists a lot of leeway. Most chose to iconize the Tacoma arts scene. As I implied in the opening paragraph, a lot of these artists chose to make living saints of Di Nino and Chihuly, the former because she has done so much to enliven the Tacoma arts scene and the latter because he has focused the world’s attention on Tacoma and the Pacific Northwest.

And it doesn’t hurt that portraits of Di Nino and Chihuly are so easy to do. A shock of orange hair for one and an eye patch for the other are all that’s needed to make either immediately recognizable.

There are 50 icons in the show by 38 different artists. They are crowded into a couple of small spaces in Two Vaults Gallery. Some of the icons are serious, but most are humorous; a number are by professional artists (and it shows), and a few are by amateurs (and it shows). In purely aesthetic terms, there’s not much good art here. But there are a lot of good ideas and a lot of self-deprecating pokes in the eye of Tacoma art.
A few examples:

St. Dale by Don Mayhre is a collage or Photoshop portrait of Chihuly with one of his trademark (or iconic) glass balls with tendrils shown behind his head. It’s orange. It looks like a halo. It also looks like Di Nino’s hair — intentionally or not.

Speaking of Di Nino’s hair, one of the funnier tributes to her is Queen of Arts (get the pun?) by Elayn Vogel. This is a portrait of Di Nino with metal scrubbers for hair. She’s wearing a crown and a monkey sits on her head in recognition of the 100th Monkey parties, which were her creation.

Di Nino herself iconizes Chihuly in her papier-mâché portrait of the glass artist with some of his works, including the glass flowers in the window at Union Station.

Photographer Chip van Gilder iconizes another Tacoma arts supporter, sweet pea from King’s Books, with a simple photograph. This picture demonstrates how easy it is to make a typical portrait photo into an icon by putting it in a deep frame.

One work I like a lot is Perpetual Transit by Kimberly Sparks-Wilmer, a homage to Pierce Transit and the people who take the bus. A saintly Madonna in the center cuddles a little bus as if it were a baby. Transit tickets flare out behind her head like a halo. Surrounding her are street people, including mothers with children, a man with a walker and a woman in a wheelchair. These are all delicate line drawings cut from a magazine or catalog and pasted over a street map. I heard from Di Nino that Sparks-Wilmer is her cousin, who “is not an artist.” You surely can’t tell it from looking at this work.

Another favorite is War Makes Peace (like hate creates love) by R. Mutt (the fictitious name Marcel Duchamp gave to the “creator” of his famous Fountain). This is an irony-filled tribute to soldiers and the military filled with military images and a crucifix. I will not attempt to interpret it here, but I encourage readers to see it and make your own judgment.

Thank you for the kind words about my piece (Our Lady of Perpetual Transit). I was pleasantly suprised that it spoke to people in the way I'd hoped. I have only one correction -- the people were drawn by me, not cut from a magazine or catalog. I shrunk them down from larger drawings so they did sort of look like found materials I guess. Anyway, thanks again for the mention and I'm glad you enjoyed it.