Everything goes well in ‘Anything Goes’ 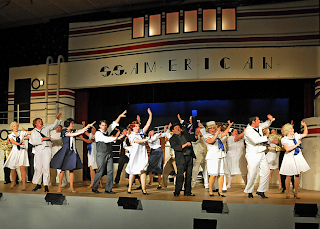 
Put very simply, I loved Cole Porter’s “Anything Goes” as produced as a dinner theater by the All Saints Theatrical Repertoire Association in Puyallup.

This lavish production rivals anything seen at larger and more professional theaters such as Seattle’s 5th Avenue or Paramount. For the dinner theater, the entire parish hall gymnasium is turned into a shipboard dining hall. The huge set designed by Chris Bohnen and Al Weigand is a cruise ship deck with walls that swing open to reveal staterooms. The costumes by Terri Soliz and Laurie Vitt are nicely designed with a couple of really inventive surprises, which I won’t reveal here, when certain outfits are turned inside-out to morph into something totally different. Danny Nelson’s lighting is outstanding, especially in the moonlit night scenes and during the song-and-dance number “Blow, Gabriel, Blow.”

On top of all this, there is a full orchestra conducted by Mike Lewis and a 31-person cast that fills the stage during the big production numbers.

The story is an extended vaudeville skit. Billy Crocker (Mario Peñalver) stows aboard a cruise ship in order to be close to the new infatuation in his life, socialite Hope Harcourt (Elizabeth Knopp), who is engaged to the silly English twerp Lord Evelyn Oakleigh (David Diggle) – and yes, he is a man named Evelyn; there’s a whole comic skit about long-e Evelyn for a man and short-e Evelyn for a woman. Also on board is the torch singer turned evangelist, Reno Sweeny (Roxanne Violett), who is also in love with Billy, and a small-time gangster named Moonface Martin (PJ Sirl) with his girlfriend, Erma (Tiffany Stephens). “Snake Eyes” Johnson, Public Enemy No. 1, is supposed to be onboard, and Billy is mistaken for him (Moonface, by the way, is merely Public Enemy No. 13.)

The story is nothing but a silly structure upon which to hang a lot of jokes and some rousing singing and dancing, not to mention some sweet romantic ballads – all well-beloved Cole Porter tunes.

Violett is a wonderful Reno Sweeny. She is tough and sassy, with a brassy voice reminiscent of the great Ethel Merman, who originated the role back in 1934. Violett’s comic chops remind me a lot of Carol Burnett, especially when she swoons and dances with Lord Evelyn on the torch song “The Gypsy in Me.”

Peñalver shows a lot of class as the romantic lead, a role that could have been as banal as most romantic leads if he did not get to show off his comic talents as he appears in various disguises in order to hide from the ship’s captain and his boss. He sings well and is able to smoothly transition from slapstick to romance.

Speaking of romantic leads, Knopp does not get to do a lot as Hope, whose main role seems to be to look beautiful. But when she does get to take center stage, her acting and singing talent is evident.

Another standout performer is Sirl as the hapless petty criminal, Moonface. His is a Lou Costello-type role, which he downplays ever so slightly. He sings/talks and acts his way through a couple of songs to great comic effect, notably a duet with Reno on “Friendship” and a hilarious solo number on “Be Like the Blue Bird.”

If I had enough room I could single out many other actors for praise, but I want to at least mention one outstanding member of the chorus. He is not even a named character, simply one of four sailors, but Charlie Ward is the best dancer in the cast, and he has a captivating smile and a personality that beams. According to the program, he is only 17 years old.

The title song at the end of Act 1 may well be the best old-time song-and-dance production I have ever seen. It left me exhausted and exhilarated. Almost as outstanding but a totally different type of production number was “Blow, Gabriel, Blow” in the second act, which featured great drum work (percussionists Aaron Baker and Skot Veitenheimer) and some great devilish light effects.

All in all this is an amazing show. As of this writing, tickets were almost sold out, so call soon.
Posted by Alec Clayton at 12:38 PM