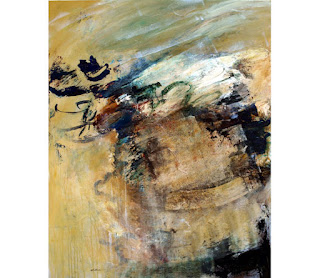 I didn’t want to like Christopher Mathie’s art, but I can’t resist the seduction of his lively canvases. I tried to resist because it’s all so damn melodramatic — windswept rocky sea shores, birds of prey swooping across stormy clouds, gobs and slashes of paint more expressive than anything I’ve seen from a painter not named de Kooning.

But how can you resist such rich, expressive surfaces?

I’ve seen a lot of Mathie’s art online but very little in the flesh; judging from what I’ve seen so far his latest work, now on display at Childhood’s End in Olympia, is his best work to date and a perfect example of something I’ve often said, which is that pictures posted on websites can’t begin to approximate the real thing.

In a printed statement Mathie said his latest work — especially the “Koi” series (see “The Writing on the Koi Pond”) — was influenced by a recent trip to New York where he got to see the Willem de Kooning retrospective and an exhibition of paintings by Joan Mitchell. I appreciate painters who acknowledge their influences, and who better to be influenced by than Mitchell and de Kooning. Mathie has learned their lessons well.

Overall, the landscapes are better than the birds. They are more grounded in reality and less showy. Clouds and rocks and pounding surf lend themselves much more readily to Mathie’s method of slathering paint on canvas, which looks fast and energetic but is actually very thoughtful and not at all as haphazard and slap-dash as it appears. These paintings are highly dramatic without appearing staged.

Seemingly all frenetic energy, there are only two paintings in the show that are somewhat quiet and meditative. One is a small, vertical landscape called “Listening to Stillness” and the other is a calm and restful scene called “Coastal Resonance XIII,” which stands out from all the others for two reasons: first because of the softly glowing blue and purple color scheme (nearly all of the others are in orange and gray and earth tones), and second because of the smooth painting in large areas. The use of such smooth and restful passages contrasts nicely with the more gestural work.

Another in the “Coastal Resonance” series, number XXVI, is much more energetic and has areas of splattered white a la Jackson Pollock. These spatters add sparkle but need to be better integrated — overlapped in places so as to not be on top of everything else. 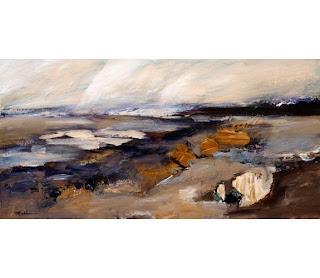 The best of his paintings are the “Koi” series. “The Writing on the Koi Pond” (mentioned above) has some amazing textural passages including areas where paint is dragged across the surface by something like a spatula or a length of board and some raised intaglio texture that looks like fish skeletons or leaf patterns. This is a marvelous painting. Also outstanding are a couple of large landscapes titled “Surge” and “A Skirmish with Balance.”

I recently read a statement to the effect that he is working on some purely abstract paintings now. I think that’s a direction his painting should be heading, and I look forward to his next show.
Also showing at Childhood’s End is a continuation of the Susan Aurand show from last month. Aurand’s show will continue through June and Mathie’s through July.

Pictured, top: "The Writing on the Koi Pond," bottom: "Axis of the Shore."
Posted by Alec Clayton at 6:59 AM