By Alec Clayton on June 9, 2012
First published in the Weekly Volcano blog Spew 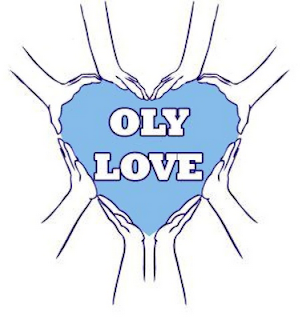 The best work of art I've seen in a long time is the "Oly Love" poster created by students of Olympia High School in response to the visit to Olympia by the hateful Westboro Baptist Church. I never really believe art by committee was possible - not real meaningful art. But these kids proved me wrong.

Just in case there is someone reading this who doesn't know what Westboro is or about their visit to Olympia - Wake up, folks! - Westboro is not a real church. They call themselves Baptists but no official Baptist organizations recognize them as legitimate. They are a group of hateful people who crusade against homosexuals by picketing funerals of dead soldiers and suing any groups or individuals who interfere with their First Amendment right to spew hatred and, among other things, stomp on the American flag, which they did quite ostentatiously in Olympia. They announce their activities on their website www.godhatesfags.com.

They announced last week that they were coming to Olympia to picket first the state capitol, and then Olympia High School, and finally the state Auditor's office, all timed to coincide with the turning in of petitions to put the new equal marriage law on the November ballot.

With only a few days' notice, the Olympia community pulled together peaceful and loving counter protests. At the forefront of the planning were students at Olympia High School. They came up with the "Oly Love" poster and the idea of having students and their supporters wear them on their backs. Eight-by-ten posters were posted on Facebook and printed on the backs of T-shirts with the idea that everybody could wear them and turn their backs on the Westboro folks.

Now to the art part. It is beautiful and effective because it so simply expresses a message of love. Hands are clasped in such a way to create the shape of a Valentine's heart in the negative center space. The heart shape is blue printed on white, Oly High colors. The beauty of this work of art is that it is as iconic as other works with similar messages such as Robert Indiana's famous "Love" painting with the slanting O and Picasso's dove painting that became an international peace symbol. Pretty damn impressive for a work of art thrown together under pressure by a bunch of high school students.

And how successful was their counter protest? My God, it was phenominal. At the capitol, their first gathering place, there were about  eight of the bad guys, all women, by-the-way, and two to three hundred of the good guys. At Olympia High the next morning in the pouring rain there were more than a thousand counter protesters singing songs of love and acceptance, many hundreds of them wearing the "Oly Love" T-shirts, and only the same half-dozen Westboro folks. They were so overwhelmed by Olympia's counter protest that they gave up and got the hell out of town after only five minutes at their scheduled final stop.

"I am so excited that I stumbled across this article. My daughter is the creator of this design and I will definitely share it with her. She never expected it to have the impact that it has. I went to the rally on Thursday and it truly was an amazing experience."

Dear Nancy M, I would love to credit your daughter for her work. Please contact me. - Alec