A frightening wonderland in pastel 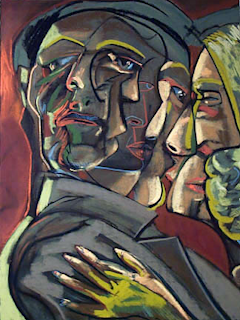 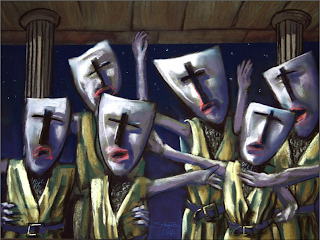 by Alec Clayton
This duo at B2 Gallery is a modern Vaudeville act in pastel, inventive, sometimes frightening and often moving. It’s Ric Hall and Ron Schmitt, two artists who have now spent years collaborating on pastel paintings. I use the term “painting” because even though pastel is a chalk, a drawing media, what they do with it is painting in concept and appearance. And it is marvelous. They create an Alice-down-the-rabbit-hole world as illustrated by Pablo Picasso and the German Expressionists.

In the first place, it is marvelous that two men can work simultaneously on a painting without pre-planning or discussion and come up with something attractive and unified. To add onto that cohesive statements about love, life, sex and religion is really mind-boggling.

I have reviewed Hall and Schmitt shows many times in the past and have enjoyed them all. This is possibly the biggest show of their work I’ve yet to see and the gallery space at B2 is large enough to show their work without crowding it. There is also greater variety to the work than in any of their previous shows. That’s the good part. The bad part is that on the day I attended the show there was so much glare and reflection on the paintings in the front room that it was almost impossible to see them.

They have always shown surrealistic images of figures — usually multiple figures, and often with extra body parts, such as two faces sharing a single eye or two bodies with seven or eight hands. There is plenty of that in this show, but there are also a number of single-figure images, which I don’t recall ever seeing before, and there are some religious images such as an almost traditional Pieta and a painting of Jesus walking on water titled “Mathew: 14-26.”

And there are some massive carved wood statues by Hall that are quite impressive.
Their color palate is generally very dark with a preponderance of blues and purples. Their imagery often deals with sex or violence. They break figures apart and rearrange them in a Cubist fashion. Some of the imagery can be unapologetically disturbing; yet, as they say in a video that plays in a continuous loop, in which they talk about their work, nobody ever complains about being offended.

A few of my favorite works are:

“Last Kiss,” two figures kissing with faces broken apart as if in stop-motion photography so they appear to have five or six faces (I tried actually counting them but I couldn’t, you’ll see what I mean.)

“Queen Ida,” a massive single female figure, nude, with eight hands grasping parts of her body. It has the monumentality of some of Picasso’s neo-classical figures.

“The Evening’s Events Left Everyone With a Clue,” another kissing couple. The woman has a tiny head and the man has gigantic fish lips. And there is a nude figure that is hidden in the background. I didn’t even see it at first, but once it pops out it is undeniable.

And “Putting Away the Goods,” a Roman soldier carrying his severed head in a box and a Cleopatra with a drawer in her chest a la Salvador Dali that opens to expose her breasts.
After years of seeing their work, Hall and Schmitt continue to amaze me.