Review “A Funny Thing Happened on the Way to the Forum”

The Lakewood Playhouse production of “A Funny Thing Happened on the Way to the Forum” is as funny as anything I’ve seen in recent memory. It’s broad, slapstick, physical, fall-down-laughing funny, and possibly the least sophisticated comedy you’ll see this year. 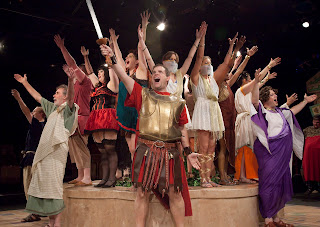 With music and lyrics by Stephen Sondheim and book by Burt Shrevelove and Larry Gelbart, “Forum” has been one of America’s favorite musical comedies since it opened on Broadway in 1962 with the one-and-only Zero Mostel in the lead role of Pseudolus, the wheeling-and-dealing slave.

If Mostel is “the one and only,” so is Chris Cantrell, who wisely does not try to emulate Mostel but plays Pseudolus in his own inimitable style.

“Forum” is an insanely wild farce with bits of Vaudeville and burlesque, lots of shouting and running around, and a huge cast of larger-than-life characters. There are also many moments when the fourth wall is shattered to bits, and there are jokes that — according to director Brie Yost — may change every night. In a program note she says that Shrevelove and Gelbart allowed for such changes in their script.

Based on plays by the Roman playwright Plautus, it is the story of Pseudolus’s outrageous attempts to bring together a pair of lovestruck youngsters, Hero (Colin Briskey) and Philia (Gretchen Boyt). Hero’s parents, Senex (Steve Tarry) and Domina (Dawn Padula), have left town and left Hero in the care of the slaves Pseudolus and Hysterium (Alex Smith), who are tasked with protecting the youth’s innocence. But Hero has other ideas. He is smitten by Philia and promises Pseudolus his freedom if he can help him win her. But Philia is owned by Marcus Lycus (Jeffery Weaver), who runs a house of courtesans, and he has sold her to Roman Army Captain Miles Gloriosus (James Wrede).

Considering when it was written and the good natured humor of the script, it is almost forgivable that it’s a sexist play. The women are little more than a parade of beauties who strut on stage for the enjoyment of the men. Among the women, only Padula and Boyt have roles of any depth. But they all throw themselves into their roles whole heartedly.

The ensemble trio called The Proteans (Josh Johnson, Coleman Hagerman and Jed Slaughter) plays everything from soldiers to eunuchs, and they are all outstanding. Cantrell and Smith’s physicality and their contorted facial expression had me practically rolling on the floor. Also turning in excellent performances are Weaver as the over-the-top Marcus Lycus; Wrede, whose appearance and deep, resonant voice were ideal for the self-loving Gloriosus (notice how almost every name is a pun on the character); a very expressive Briskey as Hero, Tarry as the loveable but not too bright Senex, and Martin J. Mackenzie as the exhausted and exhausting Erronius.

The music is secondary to the comic antics. The opening and closing tune, “Comedy Tonight” is quite catchy. “Lovely” is a tender love song performed by Hero and Philia and then reprieved hilariously as a love song between Pseudolus and Hysterium in drag. And one of the most charming numbers of all is “Everybody Ought to Have a Maid,” which is not to be confused with the very different “A Man Needs a Maid” by Neil Young.