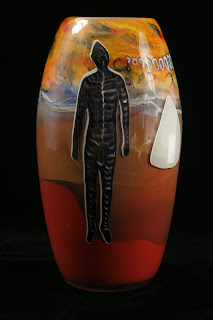 
I was quite surprised by The Marioni Family: Radical Experimentation in Glass and Jewelry at Tacoma Art Museum. I had previously seen a lot of glass by both Paul and Dante Marioni, mostly at the Museum of Glass, but what I had seen in the past was more traditional that the many fun and funky pieces by Paul Marioni in the TAM exhibit. I had no idea how strange and quirky and playful his work could be. I was also delightfully surprised by Marina Marioni’s playful and inventive jewelry and by the tremendous collection of works by other artists from Paul’s private collection (a future gift to TAM).

Paul, the father, is the more radical and the inspiration to the others. Dante, by comparison, is very traditional. His glass bowls and vases are elegant and colorful and technically flawless. Marina seems to have inherited more of her father’s innovative spirit. She uses found objects and pop culture imagery in her jewelry. “I think my use of ‘innovative’ materials has more to do with pop culture references: tattoos, Lucky Charms cereal, ’70s and ’80s TV, ’50s fashion. I can’t deny that my year as a tattoo apprentice influenced my design sense for years later. It all comes from punk rock, tattoos, rock-a-billy, MTV, and the ’80s in Seattle as a teenager,” Marina said.

But it is Paul’s work that most excited and delighted me. The first things you see are “Plug-For Those Who Dare,” a transparent flat piece in leaded glass with a black and white image of an antique car, and “The Warriors: The Shapers of Our Destiny,” another hanging piece, this one with three very strange figures: a man with a black, pointed hood for a head; a flat white figure with a featureless circle for a face; and a see-through orange figure with a blazing sun atop his or her neck. What is seen through the see-through figure is a sky at sunset. This striking cartoonish figure is like something by Phillip Guston or Matt Groening on acid. 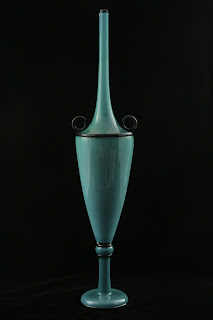 Throughout the show there are strange figures by Paul, and they are on everything: on plates, on vases, on leaded glass windows. Many of them are ghostlike or they are skeletons. One haunted image that shows up in many variations is from a series called “The Visitor.” It is a figure dressed all in black with a hood like the one in “The Warriors” and a skeleton painted on. He stands next to a weird little black hut and says Oooooooo, or variations on that in printed letters that float across a stormy night sky.

One of the most mesmerizing of all his pieces is another flat, hanging piece called “The Come On.” It is a figure with a terribly long neck, a Pinocchio nose, and circular holes for eyes through which the incredibly intense yellow background can be seen, making of the eyes burning lights.

There is also one figurative piece by Dante that is an homage to his father. It is called “Le Bello Creola/For My Father.” Made of glass and terrazzo, it is a head of an Asian figure wearing black with a long curving strand of hair. This is a figure that commands attention from across the gallery.

Also included among the collection of works by other artists are many portraits of Paul, who was mentor and inspiration to many others.