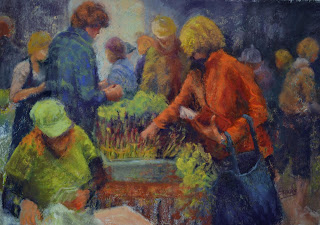 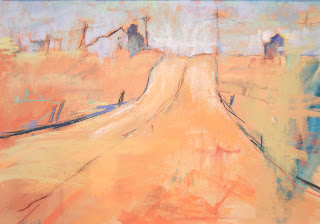 Barbara Noonan's "Small Town Bliss" pastel
The latest show at Childhood's End Gallery seems to be geared toward gift buying - a prequel to the holiday season and a celebration of the gallery's 40th year in Olympia. Everything is decorative, colorful and safe almost to the point of blandness, but very well done. It's a group show, and all of the artists display well-honed skills. But for the most part it is all too conventional for my taste and, in a couple of instances, too gimmicky.

Not that there's not a lot to like in this show.

The first works I noticed were a group of etched copper wall pieces by Shelly Carr. Each consists of square and rectangular copper plates etched with drawings (or perhaps photographs that have been etched into the surface) of things like street signs, random words, parts of buildings and bicycles put together like pieces of a jigsaw puzzle. The arrangement of the pieces and subtle variations in color and texture are visually pleasing, but the imagery seems superfluous. When the overall affect is an abstract arrangement of colors, shapes and textures that is pleasing to the eye, which these are, the imposition of recognizable imagery becomes a distracting gimmick. These pieces work best when seen from enough distance to appreciate the overall patterns.

The same can be said for Lucia Harrison's paintings on the back wall. They are small works in Prismacolor mounted on board. Each is in two parts. From across the gallery they look like dense and intricately patterned paintings with great depth of overlapping forms, but they lose some of their impact when seen up close, even though a closer inspection reveals that they are paintings of grasses and birds and twigs. It's the nature of colored pencils to be somewhat insipid; these would have been much better if painted in oil or acrylic.

Some of the more enjoyable pictures in the show are in a group of pastels by Marianne Partlow. They are flower pictures in rich tones of deep blue and purple with accents in orange and a soft yellow-green. The drawing is loose and free, and the colors are very nice.

I also particularly enjoyed some of Barbara Noonan's pastels, most especially "Small Town Bliss," which may well be the best work of art in the show. It's a very gestural drawing of a country road in tones of peachy orange with a few lonely houses perched on the horizon. It's nicely drawn, and the layering of the peach color with a dull blue-gray is excellent.

Beth Brooks' impressionistic pastels are also nicely done. Her best work is one called "Market Day," which pictures a dense crowd of shoppers in a market. It had the cropped and textured feel of a Degas pastel.

I was disappointed in Susan Aurand's three paintings with oil and found objects on wood panels - disappointed primarily because I had been so highly impressed by the last works of hers seen in this same gallery. Aurand's current works are similar, but they come off as too hokey and tricky. In each of her paintings an object assembled from found materials sits in the middle of a sky that is either stormy or on fire with sunset colors. In one the object is a door with a ladder propped in it, in another it's a window, and in a third it is a shelf with odd objects a la Joseph Cornell. They are beautifully painted and constructed, but too contrived.

Also included in the show are works by Alfred Currier, Mary Denning, Keith Lazelle, Ross Matteson, Ron Hinton and others.