"The Zoo Story" at Toy Boat Theatre
reviewed by Michael Dresdner
One dictionary definition of éclat is “brilliant show,” and that, in a nutshell, describes “The Zoo Story” at Toy Boat Theatre.
I don’t use that term loosely, but here it fits. Everything about this performance – in fact, about the total evening’s experience – was superb; brilliant acting and directing, thoroughly appropriate costumes, and a stage setting that made it all the more real.
And that’s just the play. Included in your modest ticket price is food and drink (hot dogs, chips and soda) before the play, and a live band afterwards, in case you’re not ready to go home yet. Still, the heart of the evening is the play. 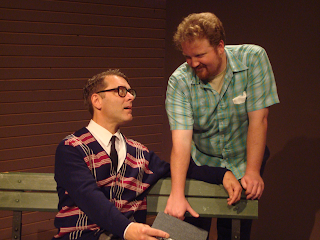 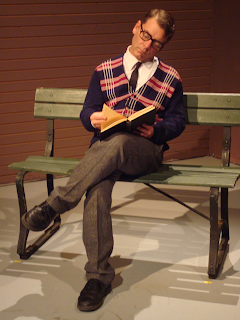 Scott Campbell as Peter, left, and Luke Amundson as Jerry, right,  in Toy Boat Theatre's production of Edward Albee’s “The Zoo Story”
It would be easy to mess up a play like “Zoo Story;” easy to play it too dark and lose the humor, too ham-handed and lose the startling nuance, too abrupt and lose the slow, imperceptible morphing of the characters. Instead, what director Brie Yost brought us through the absolutely flawless acting of Scott Campbell and Luke Amundson was a realistic, visceral experience; the finest aspiration of what live theatre hopes to be.
Both actors fulfill the ultimate dream of stage craft; to so become the character that you can’t possibly imagine anyone else playing the part. I’ve seen “Zoo Story” before, and I can assure you I’ve never seen it done so perfectly.
Yost chose to do the play in traverse, a stage setting where the acting takes place in a strip of space between rows of audience seats facing one another. That works best in intimate theatres, like the 40-seat black box Toy Boat inhabits. The audience gets to clearly see action and facial expressions while the actors realistically face and address not an unseen audience, but one another.
“Zoo Story” is a fairly short (approximately 50 minute) one-act play with just two characters. It opens with neatly dressed, coifed, bespectacled Peter (Scott Campbell) sitting and reading on a secluded park bench in NYC’s Central Park. He’s soon intruded upon by Jerry (Luke Amundson), a somewhat disheveled transient who insists on both questioning Peter and telling him long and darkly funny stories about his sordid life.
Under Jerry’s questioning, we learn that Peter is an upper middle class publisher with the perfect life: a wife, two children, one cat and two parakeets. Through his rants we discover that Jerry is one of those rootless, grubby, marginal denizens who adds to the charismatic panoply of the big city.
Jerry’s tales, though a chronicle of a pathetic existence, are genuinely laugh-out-loud funny, at least for a while. Soon, though, the stories and his demeanor turn darker. Eventually he pushes the tightly wound Peter, and the audience with him, out of his comfort zone and past the breaking point.
Campbell plays the mild mannered Peter, a completely familiar upstanding citizen, with total realism. Eventually, Jerry pushes him too far, but he tips over believably, slowly, fighting it all the way, his better nature striving to endure until it is just too much.
Amundson’s Jerry exudes character and, yes, charm, as he shares his long winded but delightfully sardonic observations of the absurd and gritty world he inhabits. The stories are not happy, but he somehow makes them damned funny. Once we’re comfortable laughing at his dark tales, an almost imperceptible change occurs.
Real schizophrenics often sound completely plausible, right up to the point that we realize they’ve somehow gone off the deep end, though we’re never sure just when that was. Amundson creates that perfectly. He adroitly slides into something frighteningly off, changing so subtly that we never notice it happening. We only realize, at some point, that it has.
The result is a theater experience that starts us out chuckling, draws us in, then hurls us through a true emotional upheaval. It’s a magnificently executed theater event, and the director, actors and all the others who created it deserve the highest praise.
Toy Boat Theatre itself deserves some explanation. It’s part of Spaceworks Tacoma, an initiative that gets owners of vacant buildings to allow arts groups to use them rent free for a short period of time. For now, and until December, Toy Boat inhabits a humble, charming space on MLK Way.
They do little or no advertising, which contributes to why you’ve probably not heard of them. Now that you have, make your way there. In fact, do it very soon, because trust me, you do not want to miss “Zoo Story.”
The Zoo Story
Oct. 13, 14, 15, 20, 21, 22
Toy Boat Theatre
http://sites.google.com/site/toyboattheatreco/home/in-the-works
Posted by Alec Clayton at 3:45 PM