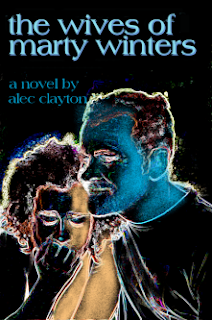 I was 19, idealistic and romantic. I met a girl and fell in love. It was like every romantic cliché ever spoken. We had a whirlwind romance and got married within a couple of months.

Funny, we never really knew each other. I never knew, for instance, whether she was religious or not or if she even liked art (I had been an art major prior to dropping out of college and joining the Navy when we got married), and I can’t remember ever seeing her read a book. If we had any common interests or beliefs, I wasn’t aware of them. But we loved each other passionately. It was burning puppy love.

And then she broke it off. As I said, I was in the Navy. My ship went on a Mediterranean cruise. When we pulled into port in Gibraltar two weeks after leaving the states and got our first mail call there was a letter to me from my wife saying she didn’t love me, she never had, she didn’t believe I loved her either, and she wanted a divorce.  To say I was knocked for a loop would be a huge understatement.

I'll spare you most of the details. In a nutshell: she was pregnant at the time and gave birth to a baby boy, we got back together and tried to make it work (it lasted a week), and then she ran off to some place in Texas and I didn’t hear from her again for two years.

Our separation and divorce was what set me on the road to becoming a writer. Whether seeking closure or cathartic healing or just wallowing in my misery, I tried to write our story in the form of a novel. I worked on it off and on for two years and finally threw the manuscript in the trash. It was terrible.

In college I took one English Lit course and one Creative Writing class. All I can remember about them was that in the writing class I wrote a story about walking along a railroad track and that in the English class I was the only student in class who could answer to the teacher’s satisfaction the question “What was the beast in Henry James’ story ‘The Beast in the Jungle’?” Oh, and I also had a huge crush on the teacher.

Three years later I married my current wife. I was 31 years old and she was 21. We’ve been happily married for 38 years. I never wrote stories about any of my three marriages, but I did combine aspects of all three wives and events from our life together into the structure of my third novel, The Wives of Marty Winters.  Marty’s first wife was patterned after my first wife, only I made her Puerto Rican and made her one evil little bitch, which my first was not. Marty’s second wife went through a transformation. She started out conniving and manipulative but responded to tragedy in her life in ways that radically changed her. She became strong and loving and a warrior for equal rights. She was based, before her transformation,  on wife number two, and after her transformation on a combination of my current wife and one of her best friends – Carolyn Wagner, a hero in the struggle for GLBT equality.

Carolyn successfully sued the Fayetteville, Arkansas school board in a precedent setting case when her gay son was attacked on the school grounds, and she was a vice president of PFLAG National and co-founder of Families United Against Hate.

Like my first two novels, The Wives of Marty Winters starts in the present and then flashes back to tell the stories leading up to current events.  Admittedly I was in a rut. It seemed the only way I could tell a story was to base it loosely on people and events I know and to go back in time to examine the history leading up to whatever is happening in the present.

The story begins at a Gay Pride festival in Seattle. Marty’s wife, a GLBT activist, is giving a speech at the rally in Volunteer Park (set at a time before they moved Pride downtown). A crazed gunman in the crowd shoots her. She is rushed to the hospital and put on life support. Her family and friends gather to be close by her side while waiting to see if she is going to live or die. While they wait they begin to reminisce, and their memories become the story that begins when Marty was a senior in high school and danced for the first time with the girl who was soon to become his wife. It’s a high school dance in the Chalet that once stood in Priest Point Park in Olympia.  From there we follow Marty to Norfolk, Virginia (his time in the Navy) and then to Nashville, Tennessee, where he lives in a hippie commune and meets his second wife – a hippie religious fanatic who goes by the name Marigold. They return to Olympia, time passes, their son comes out as gay and is harassed and beaten up, and Marty’s wife – who now goes by her real name, Selena – becomes a gay rights activist.

Meanwhile, there are two parallel stories. First is the persistent reappearance of Marty’s first wife who he can’t seem to get out of his mind, and second is the coming out and transition of friend who is transsexual but not identified as such until near the end of the novel – so I won’t spoil it by revealing his or her identity here.

Diane de la Paz wrote in The Weekly Volcano: "The Wives of Marty Winters opens with a stunning description of the Seattle Pride Day rally, where we meet Marty and Selena and move with them through a harrowing scene. (it is)... a saga about how the past haunts a man and how homophobia affects his family.”

Some of my writer friends have said it is not as good as my earlier novels. Others have said it is powerful and moving. I, frankly, am not as proud of it as I am of some of my other works, but I’m confident that it is better than most of the popular novels on the market today. I hope you will read it and see for yourself.

For reviews and an excerpt to go http://www.claytonworkspublishing.com/wivesofmartywinters.html
Posted by Alec Clayton at 10:29 AM