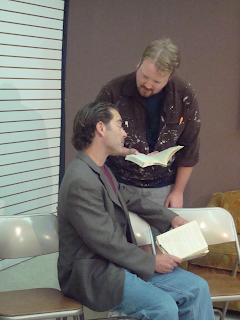 Scott Campbell as Peter is pressed by Luke Amundson as Jerry
in rehearsal for "The Zoo Story" at TBT
Toy Boat Theatre presents Edward Albee's "The Zoo Story"
Tacoma’s newest and perhaps most innovative theater company, Toy Boat Theatre, is staging a modern American classic, Edward Albee’s “The Zoo Story” starting October 13. As if it weren’t enough to do a great play with two of the area’s most popular actors (Luke Amundson and Scott Campbell) – TBT is turning it into a “3-in-one; eat, play, groove!” with a “zoo-themed dinner (think hot dog cart, popcorn stand, standard day-at-the-park fare)” and ending with live music. At the time of this writing not all participating musicians had been announced, but they include Seattle's Country Lips Oct. 21, and Leanne Trevalyan of Junk Yard Jane Oct. 22.
“The idea is to have a party centered around a powerful theatrical experience each night of the run,” Campbell said.
“The Zoo Story” is a one-act, two-person play, which won a Drama Desk award. The two characters are Peter (Campbell) and Jerry (Amundson). It is directed by Brie Yost.
Peter is a middle-class publishing executive with a wife and two daughters. He meets Jerry on a park bench in New York City's Central Park and is desperate to have a meaningful conversation with another human being. So he forces Peter to listen to his story about a visit to a zoo. On the face of it that might sound innocent enough, but nothing is innocent when written by Albee. This encounter ends with one of the men stabbed and bleeding and the audience caught up in unrelenting drama. It is fast-paced, witty, dark and humorous.
Amundson said, “This has been a wonderful experience. Getting to sink my teeth into an Albee script has been something I've been looking forward to since seeing a performance of ‘Who's Afraid of Virgina Woolf?’ in Ashland years ago. It’s an incredibly well written play filled with Albee's trademark wit and quick pacing.”
Yost said, “Zoo Story is a play that profoundly affects its audience, the kind of theatre that I love to get my hands on. It is rich with beautiful language, atypical characters, intelligent and witty wordplay, and a surge of violence. It is comedy and tragedy, and it is shocking. Martin Esslin wrote about this play as being an attack on ‘the very foundations of American Optimism.’ This and the themes of isolation are what make this nearly 55-year-old play timeless in its relevance to modern audiences, and particularly interesting in light of the Wall Street protests that are currently happening. We totally didn't plan that.”
Yost also said, “It is exciting for me to work with such great friends and colleagues in the Toy Boat space, through Spaceworks Tacoma, an incredible initiative for artists and the City of Tacoma. Luke and Scott have performances that are not to be missed, especially when combined with good eats and good grooves. Food before the show, music after. All in all a kick ass night! (can I say kick ass?)”
Yes, you can say kick ass.
Campbell had temporarily dropped out of the South Sound theater scene after very productive stints as Assistant Artistic Director at Lakewood Playhouse and Artistic Director at Tacoma Little Theatre. It will be great to see him back on stage. Of this project Campbell said, “Collaborating with Marilyn Bennett and Toy Boat Theatre is very exciting. Marilyn's vision for ‘good acting in a humble house’ provides fertile artistic ground. I believe that Albee's powerful exploration of human alienation has increasingly become more relevant over the past 50 years.”
Where: Toy Boat Theatre, 1314 M L King, Jr. Way, in the Hilltop neighborhood
When: Oct. 13, 14, 15 and 20, 21, 22. Light dinner served in the lobby and theatre at 7 p.m. Show starts at 8 p.m. followed by live music 9-10 p.m.
Admission: $20 for the entire evening; reservations can be made in advance at www.brownpapertickets.com.